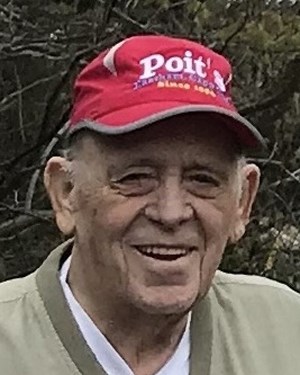 BORN
1932
DIED
2021
ABOUT
New Bedford High School
Norman J. (Mr. Poit) Poitras, 88, of Harwich, N. Fort Myers and South Easton, passed away peacefully on April 3rd, 2021. Norm was born on July 21st, 1932 to Joseph and Mary Poitras in the city of New Bedford. After Norm graduated from New Bedford High School in 1950, He attended New Hampton Prep and Colby College. After graduation, He worked as Credit Manager for Sears in Brockton and Natick for over twenty years. In 1954, after being honorably discharged from the Army, he convinced his father, Joseph to quit working in the Fall River Mills and opened Poits Drive In Restaurant in Eastham on Cape Cod with his parents. After he left Sears, he ran Poits until he retired in 1985 and moved to N. Fort Myers, returning to Cape Cod every summer to live with his family and help out at the business Norm and his dad, Joseph built. Norm was passionate about Poits and loved what he did for a living. He loved to sing with his friends and grandchildren, play the banjo, piano and the accordion. In high school, he was on the basketball and football teams and has been inducted into the New Bedford High Football Hall of Fame. He met Dolores Barboza in high school and they married in 1955. Norm and Dolly went on to have four children Daniel, Diane, David and Donna. While raising his children in South Easton, he was heavily involved in the Jaycees. He was instrumental in the formation of the Easton Jr Hockey League where he served as President. He also was a driving force and played a pivotal role in the start of the 1st Oliver Ames High School Hockey Team. When Norm retired in 1985, he co-founded an all-Senior volunteer organization to feed the hungry and homeless in N. Fort Myers, Florida called Wake Up America which continues today. Friends knew Norm would give the shirt off his back. He would count his family as his greatest success. Norm was predeceased by his parents Joseph and Mary Poitras, his infant daughter Diane and his wife Dolly. He is survived by his sister Patricia Aubut, son Danny and his wife Linda, son David and his wife Eileen, daughter Donna and her partner Mark Ryder. In addition Norm was extremely proud of all his grandchildren, Adam and Jarrod Poitras, Samantha Welch, Jacob and Joshua Poitras, Amanda Henderson and Kelly Griswold; great grandchildren Jeremy Poitras, Xavier Poitras, Braxton Poitras, Jackson and William Griswold, Madelyn, Kennedy and Haley Henderson, along with many nieces and nephews. Services will be private. Please consider a donation in Norm's name to: Wake Up America, 10945 Lone Palm Ct, N. Ft. Myers, FL. 33903.
Published by The Cape Codder from Apr. 26 to Apr. 29, 2021.
To plant trees in memory, please visit the Sympathy Store.
MEMORIAL EVENTS
To offer your sympathy during this difficult time, you can now have memorial trees planted in a National Forest in memory of your loved one.
MAKE A DONATION
MEMORIES & CONDOLENCES
0 Entries
Be the first to post a memory or condolences.