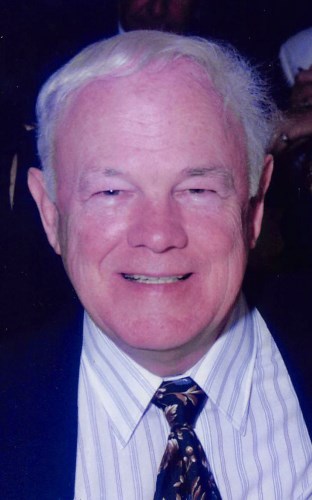 BORN
July 12, 1930
DIED
January 2, 2021
FUNERAL HOME
BADGER FUNERAL HOMES, INC.
347 KING ST
Littleton, MA 01460-1248
Richard M. McLocklin of Littleton MA, age 90, passed away after a brief illness on January 2, 2021 at Emerson Hospital, Concord MA. He is survived by his devoted wife of 68 years Gertrude Larkin McLocklin, son Richard McLocklin Jr and his wife MaryLou of Albany OR, daughter Joanne Barry and her husband Thomas of Marlborough MA, daughter Jean Jeffords and her husband Jason of Bedford NH, son Stephen McLocklin and his wife Kim of Dunbarton NH, daughter Susan Vincent and her husband Peter of Harpswell ME, and daughter Elizabeth Hobart and her husband Geoffrey of Bethesda MD and Harpswell ME. Richard was a loving Papa to 12 grandchildren: Holly, Emily, Matthew, Patrick, Peter, LeaAnne, John, Dylan, Mitchell, Morgan, Katherine and David, and also to 8 great-grandchildren: Mackenzie, Alexander, Jacob, Mila, Dylan, Daniel, Logan and Samantha. Born in Cambridge MA, Richard graduated from the Cambridge Rindge and Latin School. Richard retired after working for many years as a Sales and Marketing executive for AT&T, where he enjoyed mentoring his co-workers. Richard was a decades-long volunteer at Emerson Hospital. He also volunteered as an election vote counter for the Town of Littleton. Richard was an avid gardener and reader, and was a frequent patron of the Reuben Hoar Library in Littleton. Richard had many interests; his baking of dinner rolls 'Papa's rolls' was a family favorite. Richard's burial and celebration of life will be private. In lieu of flowers, donations in Richard's memory may be made to the National Audubon Society online at www.audubon.org
To plant trees in memory, please visit our Sympathy Store.
Published by Eagle-Independent from Jan. 6 to Jan. 14, 2021.
MEMORIAL EVENTS
No memorial events are currently scheduled.
To offer your sympathy during this difficult time, you can now have memorial trees planted in a National Forest in memory of your loved one.
Funeral services provided by:
BADGER FUNERAL HOMES, INC.
MEMORIES & CONDOLENCES
Sponsored by BADGER FUNERAL HOMES, INC..
7 Entries
You will be missed in the state of Oregon. We loved when you and Trudy came to visit, many conversation enjoyed. Peace to all the family
Greg and Regina Leytem
Friend
January 8, 2021
I was just a kid when I walked into the little ranch in Littleton. Beth was my gymnastic buddy. I went on a date with Stephen. Now 44+years later I have been a McLocklin for most of them. Somewhere along the line I started to call my father in law Dad. I cherish this with all my heart. He was a wonderful grandfather to my boys. I will miss him so very much
Kim McLocklin
Family
January 8, 2021
Deepest sympathy and prayers for the whole McLocklin family.
Dawn Howe
Coworker
January 6, 2021
Dick and Trudy were our neighbors for our first 8 years in Littleton, and we could not have asked for kinder, better people to live next to. Over the years, we got to know many members of the family and saw the strong values of the parents personified in the children. We are heartbroken for all of you while celebrating the life of this true gentleman.
Cath and Dave Estep
Friend
January 6, 2021
With love and prayers. God bless you and your family.
Dennis and Beth Green
Family Friend
January 6, 2021
Our deepest sympathy to Trudy, Jean and the entire family. Sending thoughts and prayers to all of you! May your memories of happy times last forever!
Brenda & Bill Rossignol
Family Friend
January 5, 2021
Our prayers go out to you and your family
Monika Maslen
Family Friend
January 5, 2021