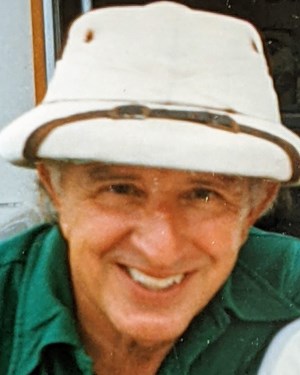 John (Hercules) Perry, 94 of Hutchinson Island, FL, formerly of Dover, MA, passed away peacefully in his home with his son and daughter, Adam and Jennifer by his side on the morning of April 10, 2021. Born Hercules (yes Hercules!) John Peratsakis in Newton MA. Along with his brother Harold and sister Luise he was raised by first generation Greek immigrants, Lulu (Stames) and Hercules Peratsakis. John was a man with an adventurous and dynamic personality ever comfortable in his own shoes, throughout his life he created his own opportunities. Losing two wives to disease, he persevered and constantly recognized his great fortune in being blessed to meet and marry two loves of his life, the mother to his children, Sylvia B Schissel and then Sandra B Gewinner. A loving father, he leaves this world a great example of the benefits of perseverance and the power of positivity to his son and daughter Adam and Jennifer, their spouses Susan and Eric and the true joys of his life, his grandchildren, Julia, Renee, Cooper, Payton and Ella. John was a firm believer that consistent forward motion and effort combined with a modicum of luck that good things would happen. Early in his life good luck came his way when he found himself in the Army, 17 years old on a ship 2 days out from Japan when word came through of surrender. After spending 18 months overseas, getting promoted to Sergeant, he returned to Massachusetts where thanks to the GI Bill he was able to earn a Business degree from Nichols College. After graduating, as with many in the Greek community, he found himself in the food business. Starting out as a salesman on the road for Araban Coffee Company he was able to create opportunity and adventures and create them he did! Throughout his 50-year career he did business and created friendships with Mom & Pop restaurants and coffee shops, grand and budget hotels and worked with many of the founders of eponymous brands including Mister Donut, Friendlys Ice Cream, Valles Steak House and Tim Hortons. Fifty-plus years after he started, he retired from Araban as its sole owner, outlasting, out preserving and most importantly out producing a consortium of 9 owners and hundreds of salesmen. John was a true character with a ZEST for living, an appreciation for spontaneity and a generous heart that was shared through his love for boating and skiing. Family and friends have fond and colorful memories of John traversing the hardened, icy New England slopes by day and being warmed by the apres scene in the lodges by night. However, even more than skiing, he loved to be on the water. He started as a 20-year-old, gunkholing the Cape with his brother on their shared boat the Samoset. Over time that exploration expanded with family and friends sharing ocean, harbor and marina adventures from Nova Scotia to the Bahamas. Even in his mid-80s no longer driving a car he was comfortable and more than able to helm his boat, Java. For decades, he was known to harbormasters and marina managers by his distinctive Pith helmet. As conversation starter for a man with a natural ability to engage, that Pith helmet ensured remembrance which inevitably led to a spot to dock, an open mooring, a seat in the restaurant/bar and an ensuing good time. John | we will miss you deeply, are thankful for you being our Father, Grandfather, Uncle and Friend and are happily blessed with many, many, many, great memories. John will be interned at Dovers Highland Cemetery, between both his wives and nearby many of his closest friends. Plans for a memorial service and a celebration of Johns life will be held at a later date. In lieu of flowers, donations may be made in Johns name to: Dana-Farber Cancer Institute, David B Perini Jr Quality of Life Clinic, c/o Dr Lisa R Diller 450 Brookline Ave, Boston, MA 02215-5450 For more information visit www.eatonfuneralhomes.com
To plant trees in memory, please visit our Sympathy Store.
Published by The Cape Codder from Apr. 24 to Apr. 29, 2021.
MEMORIAL EVENTS
No memorial events are currently scheduled.
To offer your sympathy during this difficult time, you can now have memorial trees planted in a National Forest in memory of your loved one.
MAKE A DONATION
MEMORIES & CONDOLENCES
0 Entries
Be the first to post a memory or condolences.