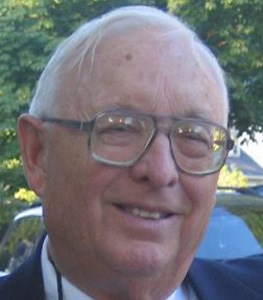 FUNERAL HOME
Downing Cottage Funeral Chapel
21 Pond St
Hingham, MA
Leighton Sheilds Jr., of Hingham, passed away on Friday, October 30, 2015, at the age of 90. Born in St. Louis, Missouri, Leighton grew up in Washington, DC, Shanghai, China, and Berkeley, Calif. He, his mother and sister relocated from China to Berkeley and awaited the eventual release of his father, a U.S. government official, held by the Japanese. Leighton graduated from Bates College, Phi Beta Kappa in 1948 and received his M.A. from Harvard University where he pursued further graduate study work. He was employed by the U.S. Office of Price Stabilization, Harvard University, and for almost 45 years by Massasoit Community College where he was a professor of History, Economics, and Anthropology and Division Chairman, retiring at age 88. A gentleman who loved learning and scholarship, he was a kind and generous man, devoted husband and doting father. He leaves his wife, Gail P. of Hingham; daughter, Hilary W. of Cambridge; cousins, Martha Saunders of Hingham, Dawn Bilezikjian of California, Leigh Saunders-Kitcher of Virginia, and Gray Saunders of Scituate. He also leaves his good friend, Daniel Kimborowicz of Hingham. Visiting hours will be held at the Downing Cottage Funeral Chapel, 21 Pond Street, Hingham, Wednesday, November 4, from 2 p.m. to 4 p.m. Funeral will be held at Hingham Congregational Church, 378 Main Street, Hingham, Thursday, November 5, at 10 a.m. In lieu of flowers, donations may be made to the Hingham Public Library and Massasoit Community College Scholarship Fund. Downing Cottage Funeral Chapel Hingham Since 1882
To plant trees in memory, please visit our Sympathy Store.
Published by The Hingham Journal from Nov. 3 to Nov. 12, 2015.
MEMORIAL EVENTS
Nov
4
Visitation
2:00p.m. - 4:00p.m.
Downing Cottage Funeral Chapel
21 Pond St, Hingham, MA
Nov
5
Funeral
10:00a.m.
Hingham Congregational Church
378 Main Street, Hingham, MA
Funeral services provided by:
Downing Cottage Funeral Chapel
MAKE A DONATION
MEMORIES & CONDOLENCES
Sponsored by Downing Cottage Funeral Chapel.
4 Entries
My condolences on the loss of a brilliant and strong man and teacher.

Professor Shields was my favorite during my time at Massasoit. He encouraged learning, not a free pass through college like most of his younger professors. Learning, studying, open debate, and great experience every single class.

I've been out of the country since 2013. But to this day I've remembered Professor Shields.

I am so sorry to only now have heard of Leighton's passing. He was should an interesting and caring man. I will certainly miss our exchanges, and wish you and his family the best in this time without him.

Nick Warendorf, and the Staff at Old Derby Animal Hospital
January 12, 2016
I just want to offer condolences to the Shields Family. I had Mr Shields as a teacher a couple of times back in the late 70's and early 80's at Massasoit Community College. It was during night school and I remember how fair of a teacher and how nice of a guy he was. I can say that he made a difference in a lot of peoples lives. May he rest in peace.
Robert Oliva
November 5, 2015
Gail and Hillary. We were so sorry to hear about Leighton's death. We know he'd been struggling so, for quite some time. We send our prayers and thoughts to you all and your extended family. I hope the sadness you must feel now is replaced fast with the good memories of his living. There are many. Best, Linda and Gerald Jones
Gerald Jones
November 5, 2015
Showing 1 - 4 of 4 results