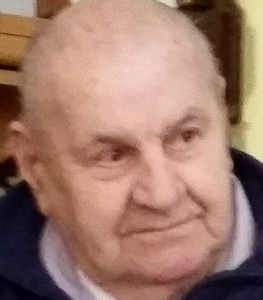 BORN
1928
DIED
2015
FUNERAL HOME
Farley Funeral Home
358 Park St.
Stoughton, MA
Albert A. Godfrey Sr., 87, a longtime resident of Stoughton, died Monday, December 7, 2015, at Good Samaritan Medical Center in Brockton. He was the husband of 64 years of the late Evelyn H. (Morgan) Godfrey. Born in Milton, he attended Milton schools. Mr. Godfrey was a veteran of the U.S. Navy during the Korean War and was a resident of Stoughton for over 62 years. He worked as a tractor trailer driver for Westwood Cartage/ Stop & Shop from 1968 until his retirement in 1993. Prior to that, he worked for Thompson Wire in Mattapan for several years. While at Thompson Wire, he was the president of United Steel Workers Local 375 for 8 years. He was a member of the VFW and the American Legion. In his free time, he enjoyed reading, watching old movies, traveling to Foxwoods, dining out and listening to music. Mr. Godfrey was the father of Donna L. Griffin and her husband John of Wrentham, Allen Godfrey, Jr. and his wife Deborah of North Attleboro, Robin Feltrup and her husband Mark of Whitman and the late Glenn H. Godfrey. He was the grandfather of Michael, Daniel and Andrew Griffin, Jessica and Gregory Godfrey and Thomas and William Feltrup. He was the great-grandfather of Benjamin, Henry, Annie, Isabel and Jude A. Griffin. Mr. Godfrey was the brother of Herbert N. Godfrey and his wife Terri of Mansfield and the late Harold C. Godfrey and Elisabeth Lavigne and her husband the late Nelson Lavigne. He was the brother-in-law of Barbara Godfrey of Vt. He is also survived by several nieces and nephews. Funeral prayers offered in the Farley Funeral Home, 358 Park St. (Rte. 27), Stoughton, Thursday, Dec. 10, at 10 a.m. Visiting hours Wednesday from 5-8 p.m. Burial will be at Knollwood Memorial Park, Canton. Donations in Alberts memory may be made to the Wounded Warrior Project, P.O. BOX 758517, Topeka, KS 66675. Directions and obituary at www.farleyfh.com. Farley Funeral Home 781-344-2676
Published by Holbrook Sun from Dec. 8 to Dec. 18, 2015.
To plant trees in memory, please visit our Sympathy Store.
MEMORIAL EVENTS
Dec
9
Visitation
5:00p.m. - 8:00p.m.
Farley Funeral Home
358 Park St., Stoughton, MA
Dec
9
Visitation
5:00p.m. - 8:00p.m.
Farley Funeral Home
358 Park Street, Stoughton, MA
Dec
10
Prayer Service
10:00a.m.
Farley Funeral Home
358 Park St., Stoughton, MA
Dec
10
Service
10:00a.m.
Farley Funeral Home
358 Park Street, Stoughton, MA
Dec
10
Interment
Knollwood Memorial Park
321 High Street, Canton, MA
Funeral services provided by:
Farley Funeral Home
MAKE A DONATION
MEMORIES & CONDOLENCES
Sponsored by Farley Funeral Home.
7 Entries
Uncle Al your house was the center of a lot of my most favorite childhood memories. You raised a beautiful family. Rest in peace. I love you.
Jane Boushehri (Godfrey)
Niece
December 8, 2015
Missing you dad more than words can say, you were our provider, our guidance, our strength, you were there for us through Glenn's passing and Moms passing you kept us strong through it all, you grew weary and it was time for you to rest in peace and be reunited with mom and Glenn. We love you and miss you be at peace. Love Robin
Robin
Daughter
December 8, 2015
Robin I'm so sorry for you loss. I loved to hear the stories your Dad would tell. He was a great man. You were a great daughter to him! He will watch over all of you now. He is in a better place with your Mom and Glenn now. May he rest in peace!
Doreen (Giles) Grover
Friend
December 8, 2015
Condolences to The Godfrey family from The Burnie family. We are sorry for the loss of your dad. Ben, Jean and family.
Kathy Calder
December 11, 2015
Jillian Jenkins
December 9, 2015
With our deepest sympathies~ Robin, Debbie, Allen and families....~ RIP MR G Love, Rhonda and Joe
Rhonda Hinkley
December 9, 2015
Al, I was very saddened to hear of the passing of your Dad, he was such a warm and kind gentleman, I always enjoyed speaking with him and learning about the Town of Milton in the "early" years.

Remember, those we love are never gone, as they live in our hearts forever.

Please extend my deepest sympathies to your sisters and their families.
Amy Ronkin
December 8, 2015
Showing 1 - 7 of 7 results