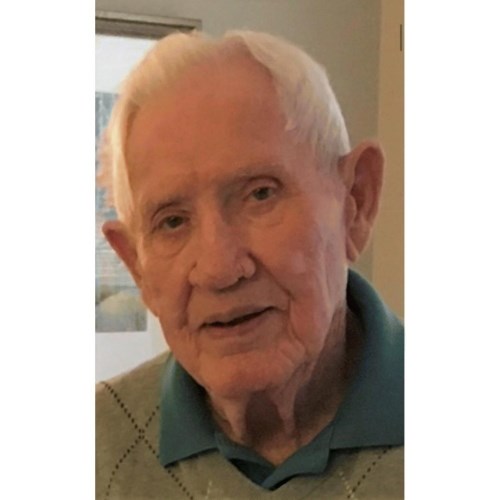 BORN
1920
DIED
2021
Lawrence "Laurie" R. Hardwick, 101, of Groveland, MA (formerly of Marblehead, MA, East Wakefield, NH and Sarasota, FL) died peacefully on August 2nd, 2021 at Care Dimensions Hospice in Lincoln, MA. Born on January 19, 1920, in Marblehead, MA, he was the son of Theodore and Alice (Rodgers) Hardwick. He grew up in Marblehead and graduated from Marblehead High School. During his teenage years, he worked at his family's ice cream shop, Rodgers Ice Cream Parlor. He kept all of his family's ice cream recipes and spent the remainder of his life making homemade ice cream for friends and family. When Laurie was 19 years old, he met the love of his life, Adelaide Torrey. Laurie enlisted in the United States Army in January of 1942. While on a 7 day leave, he married Adelaide on December 6th of that year. In October of 1944, he was sent to battle during WWII. Laurie was a part of the 291st infantry regiment, 75th infantry division. He served his country in England, France, Belgium, Holland and Germany, eventually earning a good conduct medal. In addition, the French Government awarded him with a bronze star. Laurie returned home in 1945. While following in the footsteps of his father, Laurie became a firefighter for the Town of Marblehead, a career he'd have for 30 years. Laurie and Adelaide retired in 1977 and spent 6 months of the year in Sarasota, FL and the other 6 months at their lake house on Pine River Pond in E. Wakefield, NH. They continued this for 33 years before selling their home in Sarasota to move back to New England full time. Laurie is survived by his daughter, Linda (Hardwick) Carey of E. Kingston, NH; four grand children, Kristen (Carey) Power of Exeter, NH and her husband, Brendan, Stacy Carey, also of Exeter, Geoffrey Hamilton of Arcata, CA, Brett Hamilton and his wife, Ioanna of Cyprus; six great grand children, Mia, Marissa, and Kiarra Carey, and Carey and Hagan Power, all of Exeter, and Alexander Hamilton of Cyprus; his son-in-law, Robert Hamilton and his partner, Louise Barsalou of East Kingston, NH and close family friend, Gayle (Griffiths) Fraser of Marblehead, MA. In addition to his parents, Laurie was predeceased by his daughter, Daydre (Hardwick) Hamilton, his wife of 76 years, Adelaide Hardwick and his son-in-law, Herbert W. Carey Jr. Laurie was a member of the Philanthropic Lodge F&AM for 73 years. He was an avid gardener, a football fanatic and the world's best homemade ice cream maker. But above all, Laurie loved his family more than life itself. A private burial will be held at a later date. Donations can be made to the Marblehead Fire Department, for the Muscular Dystrophy campaign, in memory of Laurie Hardwick, 1 Ocean Ave., Marblehead, MA 01945. To sign an online guestbook please visit brewitt funeralhome.com.
Published by The Marblehead Reporter from Aug. 10 to Aug. 12, 2021.
To plant trees in memory, please visit the Sympathy Store.
MEMORIAL EVENTS
To offer your sympathy during this difficult time, you can now have memorial trees planted in a National Forest in memory of your loved one.
MAKE A DONATION
MEMORIES & CONDOLENCES
3 Entries
I remember him well and his passing brings back lots of great memories of my youth.
Mark DeNies
August 19, 2021
Laurie was such a gentleman. I will always remember the wonderful time we had in Florida with Uncle Bud and Aunt Alice. Adelaide was so fun as were Linda and Daydre. Linda...you are in my thoughts and I hope all your fond memories will help at this difficult time. Fondly, Alison
Alison Murray
August 16, 2021
My sincerest simply to the Hardwick, Hamilton and Carey family. A wonderful tribute to your Dad, father in law, friend to many and grandfather.
Susan Finigan
August 13, 2021
Showing 1 - 3 of 3 results