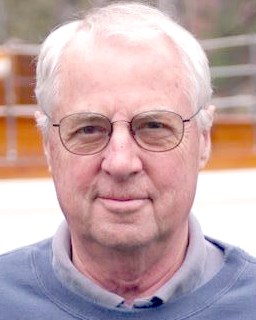 BORN
1932
DIED
2018
FUNERAL HOME
Stephen C. Gregory and Son Cremation Service
472 Meadowland Drive, Suite 7
South Burlington, VT 05403
Ronald Leon Chevrier, resident of Wake Robin in Shelburne, VT formerly of Marion, MA, passed away peacefully March 15, 2018 following a prolonged illness at the age of 85. Born in Longview, Washington on July 24th, 1932, Ron graduated from Grant High School in Portland, Oregon. He attended the University of Oregon receiving a Bachelor of Science degree in 1954, majoring in Political Science with a minor in History. Following graduation, Ron successfully competed for an appointment to the Naval Officer Candidate School in Newport, RI. He was commissioned as Ensign in March, 1955 and eventually a Lieutenant aboard the USS HAVERFIELD (DER 393). Before being released to inactive duty, as the Operations Officer he served with distinction and was awarded a Navy E for his operations department. Beginning his business career in sales, Ron later moved into marketing and general management. Companies he worked for included Proctor and Gamble, Sunshine Biscuits, Gorham Silver, Table Talk Pies and Ocean Spray Cranberries. In addition to the above he spent three years with the American Institute for Foreign Study. Several of these positions required extensive travel abroad, mainly in Western Europe and Chile. Ron retired from Ocean Spray in 1998. Throughout the years, Ron was a member of several yacht clubs: Cedar Point Yacht Club (Westport, CT), East Greenwich Yacht Club (East Greenwich, RI) and the Beverly Yacht Club (Marion, MA), where he was an active member and officer. As an avid ocean sailor he cruised the waters of Long Island Sound to Narragansett Bay, Cape Cod and the Islands downeast to Maine, as well as the Caribbean and the San Juan Islands in Washington State. His passion and love of sailing culminated in being accepted into the Cruising Club of America. On the racing front, Ron developed a love of the Marion-Bermuda Race ~ blue water racing across the Gulf Stream, navigating eddies, and maintaining 4-hour watches on the multi-day race. Ultimately he raced five of them, three aboard his beloved custom-design Alden 38, SEAFLOWER. As a member of the Marion-Bermuda Race Committee, he instituted the George Washington Marine Medical Support Program for the purpose of communication in the event of a medical emergency during the race, which fortuitously he needed on his final race. Ron was a devoted husband to Lu whom he met in Detroit, Michigan. They instantly bonded over a shared sense of humor and the fact that they both played the ukulele! They were married on February 26th, 1966. He was known for his gentle, supportive, thoughtful and compassionate nature. The message he imparted to both of his daughters on their wedding day was simply Be kind to each other. It remained a cornerstone of how he lived his life, earning him the respect of colleagues, friends and acquaintances, in addition to the devotion of his family and his grandsons who called him Bops. Ron loved his golden retrievers having had seven over the span of his 52-year marriage, most notably Alden, Sailor, and Bosun. He always had a sparkle in his eye when recounting yachting stories aboard any of his three boats or while discussing his children. His family can attest to the fact that he made the best apple pie on the planet, as well as serving up a mean Beef Wellington. He will be sadly missed by his wife, Lu Chevrier, his two daughters Nicole Chevrier of Essex Junction, VT and Michelle Chevrier Jordan of Charlotte, VT, along with his son-in-law, John Jordan, and two grandsons Brooks Jordan and Colby Jordan. He is also survived by his sister, Julanne Weller of Portland, Oregon and his three nieces, Kimberly Weller-Gordon, Lori Weller and Sally Stack. Ron is predeceased by his father and mother, Harvey Chevrier and Lorene Smith Chevrier. Passionate about his Naval service , Ron will be laid to rest in the Columbarium at Arlington National Cemetery sometime this Spring. Always most at home sitting in the cockpit after a long day puttering aboard SEAFLOWER adjusting the rigging, varnishing the teak, he enjoyed a two-finger Dewars looking out at the harbors activity, no matter the port. Cheers to a life well-lived, well-loved, and well-meaning. Fair Winds and Following Seas.
To plant trees in memory, please visit our Sympathy Store.
Published by The Sentinel - Marion from Mar. 20 to Mar. 29, 2018.
MEMORIAL EVENTS
No memorial events are currently scheduled.
To offer your sympathy during this difficult time, you can now have memorial trees planted in a National Forest in memory of your loved one.
Funeral services provided by:
Stephen C. Gregory and Son Cremation Service
MEMORIES & CONDOLENCES
Sponsored by Stephen C. Gregory and Son Cremation Service.
5 Entries
G
Geri Wetzell
March 14, 2019
My sympathy to the family - he was a kind man who always had a minute to chat. God bless.
Kelly Darmetko
September 7, 2018
We send our love and sympathy to Lu and Ron's daughters and family. We had wonderful times with Ron and Lu in Marion and we will remember him with lots of love and affection. Ron was a sweet good man who will be very fondly remembered. Bob and Brenda Ribbons, Stuart,FL.
Robert Gibbons
March 22, 2018
What a wonderful story of a life well lived surrounded by love . Lu , I am sorry I am not there for some moral support , see you soon. Big hugs to you & Mojo.
Geri Wetzell
March 22, 2018
It was a great pleasure to know Ron and Lu over the years and to enjoy fair winds and following seas with them! Our best to the whole Chevrier family.Love to allGeorge and Sheila Marshall
George Marshall
March 21, 2018