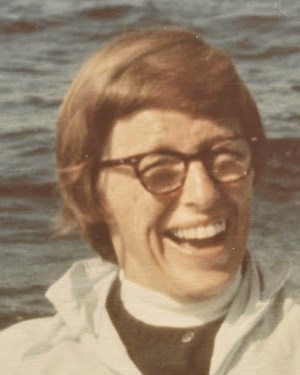 BORN
March 20, 1924
DIED
April 7, 2021
FUNERAL HOME
James H. Delaney & Son Funeral Home
48 Common Street
Walpole, MA 02081
Mary Humphreys "Polly" Staley, 97, died on April 7th, 2021 in her apartment at New Pond Village in Walpole. She had previously lived in Needham from 1973 until 2008 and before that, in Wellesley, starting in 1954. Polly was known and loved for her generous, kind and accepting nature. She and her late husband Rob sailed all over New England, especially on Narragansett Bay and along the coast of Maine. They were always accompanied by their dogs, usually golden retrievers. Raised in Kent, Connecticut where her father was a schoolmaster, Polly excelled at athletics, especially tennis, in an era where women were not encouraged to play sports. She went on to attend Bouve College (now part of Northeastern), where she got her degree in physical education. She was a fitness instructor and coach at Wellesley College and then Simmons College from the 1960s until her retirement in 1992. Polly is survived by her sons, Carl and Tad, her daughter-in-law Monica, four grandchildren and four (almost five) great-grandchildren, all of whom, along with countless friends, will miss her warmth, her wit, as well as her gracious and grounded temperament. A memorial service has yet to be arranged. Because she was a longtime supporter and foster parent to many golden retrievers, donations in Polly's honor may be made to Yankee Golden Retriever Rescue (www.ygrr.org) in Hudson, MA. Arrangements by James H. Delaney & Son Funeral Home, Walpole.
To plant trees in memory, please visit our Sympathy Store.
Published by The Needham Times from Apr. 19 to Apr. 22, 2021.
MEMORIAL EVENTS
No memorial events are currently scheduled.
To offer your sympathy during this difficult time, you can now have memorial trees planted in a National Forest in memory of your loved one.
Funeral services provided by:
James H. Delaney & Son Funeral Home
MEMORIES & CONDOLENCES
Sponsored by James H. Delaney & Son Funeral Home.
1 Entry
I do remember her from Simmons; they are memories which have always left a smile on my face.
Theresa Lafer
Student
April 20, 2021