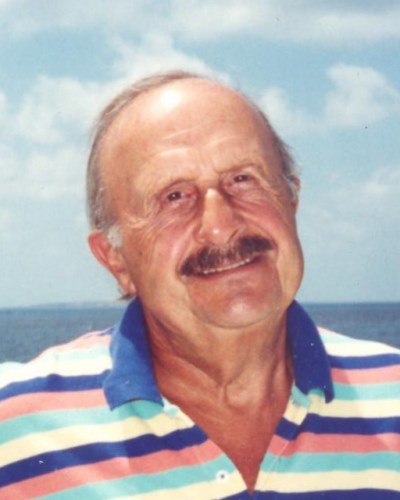 FUNERAL HOME
Nickerson Funeral Home
77 Eldredge Park Way
Orleans, MA
UPCOMING SERVICE
Celebration of Life
Sep, 11 2021
12:00p.m.
Federated Church of Orleans
Send Flowers
Stephen A. Hopkins, 89, a resident of Orleans, MA and Anguilla, British West Indies died peacefully at his home in Orleans on May 30, 2021. He and his wife had recently returned from their winter home in Anguilla. Steve had survived metastatic melanoma but had been in failing health for several years. Stephen was the second child of Reuben S. Hopkins and Lucy Knowles Hopkins. He was born on April 25, 1932 at the home of Nettie Knowles, a mid-wife in Eastham and grew up in the family home on Hopkins Lane in Orleans. He graduated from Orleans High School in 1950, a star athlete and one of 25 students. Steve graduated from the University of Massachusetts, Amherst, in 1954. While in college, he worked summers as a swimming director for the Red Cross on the Cape. After graduating from college, he was drafted and served in the Army in Stuttgart, Germany as an editor of the Seventh Army Sentinel. Following his stint in the Army, Steve attended Boston College Law School and worked during the day in the US Attorney's office as an administrative assistant to Elliot. L Richardson. After graduation, Steve served one year as a law clerk to Federal Judge Andrew Caffrey and in 1962 Steve joined the law firm of Sherburne, Powers and Needham, one of Bostons oldest firms. He remained a partner with the firm and head of the trial department until his retirement in 1998. For many years Steve was a Trustee of the Flaschner Judicial Institute which conducted educational programs for judges in Massachusetts; he was one of only two private attorneys to serve in that role. He was a life member of the Massachusetts Bar Foundation which funds law-oriented programs throughout the state. Steve and his first wife, Harriette W. Hopkins, raised their family and lived for many years in Marblehead, MA. There he served as selectman for three years and was chairman of the Zoning Board of Appeals for ten years. In 1981 Steve and Hattie moved their family to Ipswich, MA. In 1990 Steve married Sylvia McMeen and they lived in Manchester by the Sea until close to his retirement. Since his retirement, Steve and Sylvia have divided their time between their house in Orleans and the home they built in Anguilla, BWI. For years they traveled back and forth with two Great Danes. Anguilla was a special place for Steve and he enjoyed many years singing with the choir at St. Augustines Anglican Church. Steve has written two books, Three Dollars Just Same and Memoirs of a Cape Codder in which he chronicles stories of his youthful activities on the Cape, experiences as a trial attorney and his travels over the years. In addition to his wife, Stephen is survived by his sister, Lucy J. Buckley of Chatham, MA, his brother Richard H. Hopkins of Orleans. He is survived by eight children, Christopher R (Donna) of Danvers, MA, Joshua S of Marblehead, MA, Bethany K Weagle of Ipswich, MA, Jessica L. of Providence, RI, E. Margaret Peterson (Ronald) of Bridgewater, MA, Victoria R. (Troung) of Houston, TX, Juliana P. (Brenn) of Genesco, IL, LeHoa of Birmingham. AL, eighteen grandchildren and two great grandchildren. A Celebration of Life service is planned for September 11, 2021 at the Federated Church of Orleans at 12:00 pm. In lieu of flowers, memorial donations may be made to BroadReach Hospice, Chatham, MA or a charity of one's choice For online condolences please visit: www.nickerson funerals.com.
To plant trees in memory, please visit our Sympathy Store.
Published by The Cape Codder from Jun. 3 to Jun. 11, 2021.
MEMORIAL EVENTS
Sep
11
Celebration of Life
12:00p.m.
Federated Church of Orleans
, MA
Funeral services provided by:
Nickerson Funeral Home
MAKE A DONATION
Please consider a donation as requested by the family.
MEMORIES & CONDOLENCES
Sponsored by Nickerson Funeral Home.
4 Entries
We were saddened to learn of Steve's passing.To the tropical sunset restaurant team on Anguilla, Steve was a loyal customer that became a valued friend. Our deepest sympathy to Steve's wife Sylvia, his children, grandchildren, brother, entire family and friends. We will miss him dearly. Rest In perpetual peace Steve
Tropical Sunset Restaurant & Bar
Friend
June 13, 2021
We wish to extend our deepest sympathies at this difficult time.
The Staff of Nickerson Funeral Home
June 11, 2021
Sister Sylvia and the extended family, please accept our sincere condolences at this very difficult time. I pray that our God of heaven will comfort you and give you peace in the face of such a sting...death!
Brother Stephen was indeed an affectionate neighbour, my family and I will miss him dearly. May his soul rest in perpetual peace and rise in glory!
From: Agnes Duncan-Maurice, Merlin Duncan-Webster and family of Seafeather's, East End, ANGUILLA
Marvo Duncan-Webster
Neighbor
June 3, 2021
Steve will be fondly remembered on Anguilla by all who knew him. Sincere condolences to Sylvia, his children, grandchildren and siblings. May the many memories created bring you peace and comfort. May his soul repose in perfect peace.
Gina Brooks
June 3, 2021
Showing 1 - 4 of 4 results