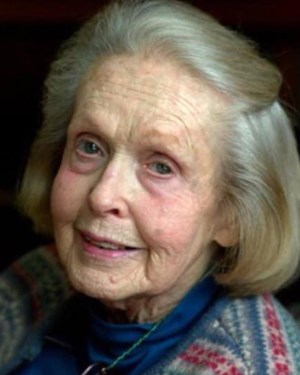 FUNERAL HOME
George F. Doherty & Sons Funeral Home
477 Washington Street
Wellesley, MA 02482
Miriam W. ODay, daughter of the late George and May (Rand) Williamson, sister of the late John Williamson, and wife of the late George Dyer ODay, passed away June 29, 2020 after a brief illness in Exeter, New Hampshire at the age of 90. Miriam was raised in Wellesley Hills and spent her summers first on a farm in Pepperell and from the time she was 16 in Duxbury where her extended family would gather for the next 61 years. She attended Beaver Country Day and Finch College in New York. While at Finch she met her future husband George. He took her to the Harvard Club on their first date and while he enjoyed a scotch on the rocks Miriam stayed true to form and told him her preferred drink would be a chocolate ice cream soda! Miriam and George were married in 1949 and after a brief time in New York they settled in the home they built in Dover, MA where she would live for over 60 years. Miriam stayed busy raising their three children, homemaking, caring for her much loved dogs and tending her gardens. She was also an active volunteer reading for the blind with various organizations such as the National Library Service and serving two terms as President of the Board of Trustees for the Childrens Museum of Boston. She was a cornerstone supporting her husband as he established himself as one of the worlds premier yachtsmen and the company he founded, ODay Sailboats. Miriam was with George in Naples, Italy when he won a Gold Medal in the 1960 Olympic Games and in Newport, Rhode Island when he was assistant helmsman on two Americas Cup winners in 1962 and 1967, thus becoming the first man ever to win Sailings two highest honors. Fittingly, when her husband was posthumously elected to the Sailing Hall of Fame Miriam accepted the honor on his behalf. While not much of a sailor herself, on her 75th birthday she crewed for her son one last time as they won the Clarks Island Trophy of the Duxbury Yacht Club. Once her children were college-aged Miriam emerged from the large shadow cast by her beloved husband by putting her considerable gardening and artistic talents to work and formed her own business, Garden Designs. For over 35 years, until she was 85, she created glorious gardens and landscapes for many homes in the western suburbs of Boston, several businesses, Designer Showhouses and some of the finest estates in the greater Boston area. Her nature was not just to provide her brilliant vision for a landscape but to get out there with her employees with a shovel to dig and plant. Colleagues love to share stories about Miriam such as one rainy afternoon when she was covered head to toe in mud readying a property for a major event that evening. Several hours later she returned as a guest dressed immaculately, looking like she just came from a day at a spa and beauty parlor! Her talent for flower arranging was second to none and her work was featured a number of times in national magazines. Her work was recognized by the Garden Club of America and she was honored with lifetime achievement awards to both that and the Fox Hill Garden Club. She was also a past member of The Junior League of Boston, The Vincent Club, The Charles River Valley Garden Club, The Dedham Country and Polo Club, and The Duxbury Yacht Club. Another hallmark of Miriam was the lasting friendships she developed and maintained throughout her life from all walks of life. As one family friend said She was a stabilizing presence whenever she entered our lives. She lost your father at a relatively early age, after which she picked up her life and carried on with grace and admirable independence. As mother, wife, friend, professional, she has always been a role model to which I aspired. Many often sought her counsel and a not infrequent sentiment of her was She was like a second mother to me. Another common description was She was always a lady. Miriam is survived by her three children, Pamela, Mark and his wife Deborah, and Elizabeth, and four grandchildren, Thomson and his wife Vanessa, Kathryn and her husband Gregory, William and Brittany, as well as her brothers children, Kirk and wife Janet and George Williamson, her cousin George Rands wife, Alannah, and Philip Rand as well as many other family members. A private burial has been held in Dovers Highland Cemetery and a memorial service will be held in the Fall. In lieu of flowers donations in Miriams memory can be made to The National Library Service (https://www.loc.gov/nls/), The American Macular Degeneration Foundation (https://www.macular.org) or Chase Away K9 Cancer (https://chaseawayk9cancer.org). Online guestbook at www.gfdoherty.com. Arrangements by George F. Doherty & Sons Funeral Home, Wellesley.
To plant trees in memory, please visit our Sympathy Store.
Published by The Press from Jul. 4 to Jul. 17, 2020.
MEMORIAL EVENTS
No memorial events are currently scheduled.
To offer your sympathy during this difficult time, you can now have memorial trees planted in a National Forest in memory of your loved one.
Funeral services provided by:
George F. Doherty & Sons Funeral Home
MEMORIES & CONDOLENCES
Sponsored by George F. Doherty & Sons Funeral Home.
0 Entries
Be the first to post a memory or condolences.