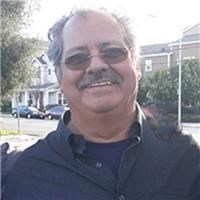 BORN
1949
DIED
2021
Francisco "Frank" Gutierrez Avila passed away on January 31,2021. He was born and raised in San Jose, California on March 22, 1949 to parents Pablo Avila and Theodora Gutierrez Avila. He was the third of seven children in a large and loving family. In 1969 at the age of 19 he married the love of his life, Donna Mae Huss. They went on to have four children whom they raised in the Bay Area and later in Willits, California.
As a young man he worked as a professional landscaper throughout the Bay Area. One of his proudest professional accomplishments was landscaping the Trans America Pyramid in San Francisco. He went on to work for General Motors in San Jose where he did auto body repair. He later worked for PG&E, which he retired from after 31 years.
Frank's joys in life included gardening, fishing, family gatherings, attending car shows, and Giants baseball. Family always came first with Frank and he always made any sacrifice necessary to take care of his family. He was a kind and loving friend to all who knew him. He was loved by many for his positive, gentle, and caring nature. He always had a smile on his face and a kind word for everyone.
Frank was preceded in death by his parents Pablo Avila and Theodora Gutierrez Avila, brother Renee Avila, and sisters Armandina Garcia and Betty Herrera. He is survived by wife Donna Avila; children Bernadette Willet, Isaac Avila, Armandina Avila Jacinth, and Michelle Avila; grandchildren Marissa Avila, Vincient Avila, Dylan Avila, Sirayah Avila, and Braelynn Hansen; great grandson James Avila; brothers Samuel Avila and Pablo Avila Jr.; sister Christina Reyes; and numerous nieces, nephews, aunts and uncles.
A memorial service will be held on March 27, 2021 at 1:00 pm at Our Lady By The Sea Catholic Church at 1385 Michigan Avenue in Alviso, California, 95002. Memorial donations such as flowers can be sent to the church the day of services.
Published by The WillitsNews from Feb. 27 to Mar. 28, 2021.
To plant trees in memory, please visit the Sympathy Store.
MEMORIAL EVENTS
Mar
27
Memorial service
1:00p.m.
Our Lady By The Sea Catholic Church
1385 Michigan Avenue, Alviso, CA
MAKE A DONATION
MEMORIES & CONDOLENCES
Sponsored by WillitsNews.com.
0 Entries
Be the first to post a memory or condolences.