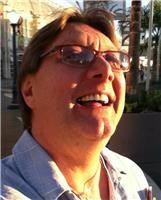 Jaysen Dale Green, 60, passed away unexpectedly following a heart attack at his home in Cathedral City, Calif., on February 16, 2021. Jaysen was born on January 23, 1961 in Albert Lea, Minn.
Jaysen graduated from Albert Lea High School 1979 and moved to California in 1986. Several years later he returned to Minnesota, where he met his husband, Walter Richey, in 1993. Jaysen worked at the University of Minnesota until they moved to Ukiah in 2001. Together they owned and operated several thriving businesses. In February, 2021 they moved to Cathedral City, CA.
Jaysen was very genuine, full of life, always on the go, and always had to be doing something. His energy was endless. His laughter was contagious. His humor was welcoming, and his stories were fun. We should all be so lucky to know someone like him.
Jaysen and Walter loved to travel. From Europe to Africa to Asia they traveled the world together, and for the past several years they spent their winters at their vacation home in Mexico.
Thank you for the time we got to spend with you, Jaysen. And for your stories. You will be greatly missed.
In addition to Walter, Jaysen is survived by his mother JoAnn of Albert Lea, MN, aunt Donna Arneson of Buckeye, AZ, uncle Dale (Barb) Flo of Le Sueur, MN, brother Tom of Beaverton, OR, and sisters Sue (Gary) Riley of Carroll, IA; Linka (Butch) Roberts of Beaverton, OR; and Lori (Kenn) Register of Albert Lea, MN, as well as many nieces, nephews, cousins and friends, and his loving dog Noodle. He was preceded in death by his father, Harry, brothers Steve, Chuck and Bryce, niece Elizabeth Zwinger and nephew Jacob Davis.
A Celebration of Life will be held 4:00 P.M. Saturday, April 17 at Golden Rule on Ridgewood Ranch between Ukiah and Willits off Highway 101.
Published by The WillitsNews from Apr. 10 to May 9, 2021.
To plant trees in memory, please visit the Sympathy Store.
MEMORIAL EVENTS
Apr
17
Celebration of Life
4:00p.m.
Golden Rule on Ridgewood Ranch
between Ukiah and Willits off Highway 101., CA
MAKE A DONATION
MEMORIES & CONDOLENCES
Sponsored by WillitsNews.com.
0 Entries
Be the first to post a memory or condolences.