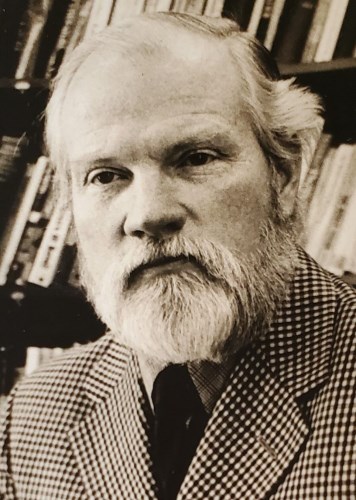 SEATTLE, WA - James William Nichols, former head of the English Department at Winona State University, died May 18, 2021 in Seattle, Washington at the age of 96.

Born in St. Louis, Missouri, December 26, 1924. He served in the Fox Company, 398th Infantry Regiment in WWII. He graduated Phi Beta Kappa from the University of Missouri (BA), University of Birmingham, England (MA), and University of Washington (PhD), and had a teaching career that spanned 5 decades, including 34 years at WSU. He published numerous academic articles as well as a young adult novel, Boundary Waters (J.M Dent & Sons, 1985). Sabbatical leaves took him to the Hashemite Kingdom of Jordan, the University of International Business and Economics (Beijing) and Shanghai International Studies University. He was particularly proud of the role the Department of English played in supporting graduate education for students from the Chinese universities.

Non-academic jobs ranged from teaching cricket in an English prep school to stream guarding in Alaska, but travel was central to his life. He camped in six continents and most countries in Europe, staying long enough to pay taxes in five.

Retiring as professor emeritus in 2002, he divided his time between Winona and Cambridge (England), reading and writing memoirs.

He is survived by his wife, Ann: three children: John Nichols (Rebekah Zaveloff) of Chicago, Elizabeth Nichols of Seattle, Mary Alexandra Nichols of San Francisco and grandchildren: Jasper Nichols, Hannah Nichols, and Trayton Nichols. He was preceded in death by his parents and two sisters.

To plant trees in memory, please visit our Sympathy Store.
Published by Winona Daily News on Jun. 12, 2021.
MEMORIAL EVENTS
No memorial events are currently scheduled.
To offer your sympathy during this difficult time, you can now have memorial trees planted in a National Forest in memory of your loved one.
MAKE A DONATION
MEMORIES & CONDOLENCES
2 Entries
So sorry to hear of Jim's death. Thinking of you all.
Kate O'Grady
June 22, 2021
Sorry to hear Professor Nichols passed. He was a good teacher. I had a class at WSU he taught.
Geralyn La Rocque
School
June 12, 2021
Showing 1 - 2 of 2 results