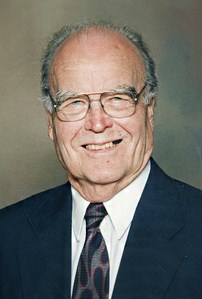 East Bend -- James Lawrence Haynes, 95, passed away Friday, September 4, 2020. He was born March 23rd, 1925 in Little Yadkin Town-Ship (now West Bend) to Lillian Gladys Jones Haynes and James F. Haynes. He graduated from Lewisville High School and his further education at Mars Hill Junior College was interrupted by serving in the US Navy aboard the USS LST 653 as a radar man 2C, during World War II. His ship was one of the first 3 ships carrying occupation troops into Toyoko Harbor when Japan surrendered. After the war, he returned to Mars Hill College, where he met his wife of 73 years, Wilma Louise Jones Haynes. They met in September of 1946 and they were married August 10th, 1947. He graduated from Wake Forest College in 1949 as a proud father of their first daughter, Carolyn. He was employed by Southern Bell Telephone and Telegraph Co. for 14 years, first as a cable splicer's helper; then as a commercial representative in the business office; then as office manager in Greensboro, NC. He then served as a manager of the Winston-Salem business office and finally as a division supervisor of the company's Eastern Division of North Carolina, in Raleigh, NC. He resigned after serving 14 years with Southern Bell and got his building contractor's license. He did residential building for 11 years. Then he began commercial building as a project manager for JD Skidmore of Greensboro, NC, working in nine southern states and Washington, DC. He retired in 1990, and he and his wife built their retirement home in East Bend, NC.

In addition to his parents, he was preceded in death by an infant grandson, Jared L. Haynes; brother, Kenneth C. Haynes; sister, Mary Haynes Dalton. He is survived by his wife, Wilma Haynes; daughters, Carolyn Sandoval, Wanda (David) Smith, Janet Watkins, Kathryn Porter; son, John Lawrence (Debbie) Haynes; 9 grandchildren, 12 great-grandchildren; and a sister, Anne Haynes Jenkins. To support the mission of his Alma Mater, Wake Forest University, he donated his body to Wake Forest School of Medicine. A memorial service will be conducted Saturday, September 26, 2020 at 2:00 PM in the Gentry Family Chapel, East Bend with Rev. Vann Harrell officiating with full military honors conducted by Yadkin VFW Post #10346 and the US Navy Honor Guard. In lieu of flowers, memorials may be made to Friendship Baptist Church, 4744 Siloam Rd., East Bend, NC, 27018.Online condolences may be made to www.gentryfuneralservice.com.