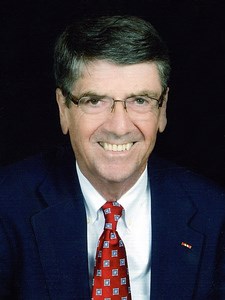 Charles David Jackson, better known by all as "David," "Dave," or "DD," moved to his home in heaven on August 24, 2021, surrounded by loved ones, after a courageous battle with pulmonary complications. He was born in Thomasville, NC on March 18, 1940, to Evelyn and A.C. Jackson, who precede him in death. He is survived by his loving wife, Shearra Harris Jackson; his two beautiful daughters, Kristi Jackson and Kendra Jackson Wilcox; and his two precious granddaughters, Lyndsay and Anna Wilcox. He is also survived by his two sisters, Dianne (Tom) Houlihan and Barbara Wynn. David attended school in Thomasville, NC and later graduated from Wake Forest University in 1962. He served in the National Guard of North Carolina and discharged as a Staff Sergeant in 1968. He went on to work a full career as a state probation/parole officer for 34 years and retired in 2001 as a chief in the 21st Judicial District having impacted many lives. In 2001, David received the Order of the Long Leaf Pine, North Carolina's highest service award. After retirement David enjoyed playing golf, ballroom dancing with Shearra, and bird watching from his favorite chair. David and Shearra shared 57 years of marriage, where they supported one another and built a loving family. His granddaughters named him their "DD," a name he wore proudly. David was ever patient with his family, generous with friends, and never failed to have the best joke in any room. Having never met a stranger, David was the first to make a new friend anywhere he went. His life's goal was to share joy and God's love with others. He and Shearra joined Ardmore Baptist Church in 1986 and enjoyed fellowship and friendship among the congregation. David was a gift to all who were fortunate enough to know him. We will all feel his absence each day but can go peacefully knowing that he left a solid foundation to live our lives on. To those of you who loved our DD as much as we did, we are grateful for you. We hope you will remember his laughter and joy just as we will. We would greatly appreciate hearing any stories or memories you have of David, big or small. Please email us at [email protected] A service celebrating David's life will be held on Sunday, August 29, 2021, at 1:30pm at Ardmore Baptist Church, 501 Miller Street, Winston-Salem, NC 27103 with Rev. Tyler Tankersley and Dr. Paul Mullen officiating. The family will receive friends following the service at the church. In lieu of flowers, the family requests that donations be made to support research in autoimmune diseases through Rheumatology at Duke Hospital. Checks should be made payable to Duke University, noting David Jackson's name in the memo line, and mailed to Duke Health Development, ATTN: Jillian Ream, Duke Alumni and Development Records, Box 90581, Durham, NC 27708. Donations may also be made in David's memory to Ardmore Baptist Church, 501 Miller Street, Winston-Salem, NC 27103. Hayworth-Miller Silas Creek Chapel is serving the family of Mr. Jackson. Online condolences may be made at www.hayworth-miller.com.

3315 Silas Creek Parkway, Winston-Salem, NC 27103
Published by Winston-Salem Journal on Aug. 27, 2021.
To plant trees in memory, please visit the Sympathy Store.
MEMORIAL EVENTS
Aug
29
Celebration of Life
1:30p.m.
Ardmore Baptist Church
501 Miller St., Winston-Salem, NC
Funeral services provided by:
Hayworth-Miller Funeral Home - Winston-Salem
MAKE A DONATION
MEMORIES & CONDOLENCES
Sponsored by Hayworth-Miller Funeral Home - Winston-Salem.
2 Entries
I´m so sorry for your loss. My prayers are with the family during this time of sorrow. I worked with him for many years in Probation and he was one of the good guys In loving memory of a wonderful person.
Sonya Moorefield
Work
August 27, 2021
We are so very saddened by David's passing,but we know his valiant struggle and are confident that he is breathing deeply and has no pain now with his Lord. We're grateful to have known and loved him.
Elaine and Bob Hooven
Friend
August 27, 2021
Showing 1 - 2 of 2 results