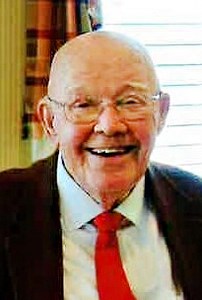 Perry was born in Bainbridge, Georgia to the late Jerry Elmer Mobley and Nell Smith Mobley of Albany, Georgia. He was married to his childhood sweetheart, Jeane Duke, of Americus, Georgia, who presently lives in Winston-Salem, NC.

Perry is survived by his sister, Mary Nell. He was predeceased by two sisters, Mrs. Claude Hughes (Valeria) and Mrs. Armond Ouimette (Bernice).

Perry served in the Navy during World War II, after which he prepared himself for ordination in the Presbyterian Church by attending Georgia Southwestern University in Americus, GA; Presbyterian College in Clinton, SC; and Columbia Theological Seminary in Decatur, GA. He received his doctorate from King College in Bristol, TN, where he later served on the Board of Trustees.

Under Dr. Mobley's leadership while service as found pastor of Trinity EPC, The King's Academy came into being through the inspiration of diligent mothers of home-schoolers and the support of the Elders of the church. TKA now provides Christian education from kindergarten through twelve grades.

Likewise, the vision of dedicated, faithful servants has brought the Gospel and love of Jesus to the Hispanic community. This ministry which began in an open field is now housed in a new facility at Trinity.

In 1987, Dr. Mobley was elected Moderator of the General Assembly, the highest church court position of the EPC denomination.

Perry returned to Trinity EPC in Florence by invitation of Pastor Bryan Slater and the elders to serve as Director of Pastoral Care and Visitors, where he retired and became Pastor Emeritus.

Upon completion of Trinity Church's present sanctuary in 2005, a golden cross was installed in honor of Dr. Perry Mobley, Founding Pastor, who "has served the people with authority, compassion, humor, and love. Whatever his role – Senior Pastor, Moderator of the EPC General Assembly, Interim Pastor at other churches, Pastoral Care Director, Pastor Emeritus – his life exemplifies that of a servant leader. As in II Chronicles 32:20-21, Perry Mobley has done what was good, right, and true before the Lord his God. And in every work which he began in the service of the house of God, he did with all his heart and prospered."

Football was this athlete's favorite sport. He played in high school, refereed in little leagues and officiated in Triple A high schools. He also enjoyed tennis, golf, fishing, and hunting. His hobbies included tin-smithing, rug-hooking and birding with Jeane.

A service of praise, worship and thanksgiving was held at Reynolda EPC on Reynolda Road, Sunday, December 6, at 2:00 p.m. with Alan Wright presiding.

"To God be the glory, great things He has done." What a mighty God we serve!
To plant trees in memory, please visit our Sympathy Store.
Published by Winston-Salem Journal on Dec. 10, 2020.
MEMORIAL EVENTS
Dec
6
Service
2:00p.m.
Reynolda EPC
Reynolda Road
GUEST BOOK
8 Entries
Mr. Mobley, my heart breaks and rejoices at the same time as I write this to you. One, because my heart rejoices that you are at an everlasting peace. Secondly, my heart is saddened that I didn´t get to say goodbye, to you. But I know this is not the end, this is the beginning. The impact you left on my life, created this wonderful journey, I just wish you were here, to celebrate with me, as I go. I cannot imagine living this life, without you, in it. You are the most generous, humble & compassionate, loving person, I have ever known, in this entire world. You were there for me from the very beginning at the tender age of six. You are the reason that I was lead to open up my heart to a relationship with Christ. You and Jean, both. I cannot thank you enough. Perry, you are and always will be a very special part of my life. Jean, you and Perry loved me as your own child, without measure and no stipulations. You both always opened your heart to me and never turned me away. I know I made some awful mistakes, but you two, loved me regardless of them, and I felt complete, and I felt a sense of belonging in your presence. I can honestly say no matter how ashamed or dirty or rotten I felt inside, when I came to you both, somehow you both, made me feel better, always. Jean, you are like a mother to me, and Perry, you are like a father to me, and I hope that as I grow older, and wiser, as you both are, that I can carry on, everything you both have taught me, in life. Jean and Perry, you both are my greatest blessings, and have been with me, in my darkest of days, when I felt hopeless, and showed me that there is light in the darkness. I thank you both for that, from the bottom of my heart. I cannot wait to rejoice with you again, in heaven. As well as my grandfather, Pop-Pop (Kenneth), and my other loved ones that have passed, on to rejoice with the Heavenly Father. What a day of rejoicing it will be! Perry, in my home, I have the beautiful candle holder you gave me made of tin, it is my favorite gift of all time, I will never part with it. I always walk in that room, to look at it, and think of you daily. I see a red bird and it reminds me of Jean and I see a man working with tin, in his little workshop and it reminds of, you. I miss you terribly, Perry. Thinking of Jean & Praying for comfort and peace for you, during this time. I love you, Jean. Mary Heath
Mary Heath
December 16, 2020
Praying for the Father´s comfort in these days. Remember seeing you both at many Presbytery meetings over the years. A joyous Christmas to you and the family even at such a time!
David F Steele Jr
December 15, 2020
Such a blessing it was to know Perry during our years at the General Assembly Office and at Ward Church. Always a beacon of God´s love, a source of humor and a calming influence, Perry was surely Jesus´ hands and feet wherever he went. Our sympathy and prayers to you, Jeane, and your dear family. God bless and comfort you.
Marilyn and David Bartel
December 14, 2020
I am touched with the feelings of your infirmities!! My heart is broken for you because I KNOW!! You both have been more than special in our lives!! More than you KNOW!! There is no one I had rather hear preach the WORD than Perry and no one I would rather have Praying for me than YOU!! Your lives have impacted Sooo many for the KOG!! He is a special man of God & you are His Handmaiden & one CLASSY LADY!! Rest in HIS ARMS & GRIEVE WELL our LOVE Matthew 6:33 always
Tom Dance
December 13, 2020
Our love and deepest sympathy to you and your family on the death of Perry..what fond memories we have of our time at Reynolds with both of you and many congrenants. We are now in Summerville,SC and doing well for 81 years. May God bless you richly in the coming days.
Jerry Davenport
December 11, 2020
Jeane, I am so sorry for the loss of your husband. I have enjoyed our the times together at the hair salon. You are in my heart and prayers.
Joeann Settle
December 11, 2020
Dearest Jeanne, Rusty and i rejoice in Perry´s home going but are truly saddened for your loss. I´ll never forget the night we, along with Steve and Libby Cooper, took the two of you and Evelyn and Ed Wilson to Shuler´s BBQ in Latta. The ladies rode in one car and the men in another. After our meal, I took the ladies on a sightseeing tour of Latta. We had the most wonderful time and I treasure that memory, as well as so many others. I´m keeping you and your family close in prayer. Thank you for being such wonderful neighbors to my Aunt Jean and Uncle Steve Irick. We all love the Mobleys so much!
Martha and Rusty Davis
December 10, 2020
I will always remember Perry´s presence in the Homestead Hills Clubhouse lobby asking residents if they would like to pray as they walked by. He helped to provide comfort to many!
Nancy Gibson
December 10, 2020