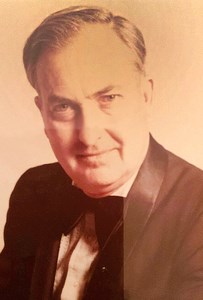 Frederick E. Brookwell of Clemmons, North Carolina, died on January 7, 2022, at the age of 97. Born in 1924 in Montclair, New Jersey, he attended and graduated from Verona High School in 1942 and then enlisted in the United States Navy. He served in the Navy's Amphibious Forces from 1943 - 1946 and piloted an LCT in the invasion of Normandy at Omaha Beach on D-Day. He remained in the Navy through the end of World War II and was honorably discharged with the European Theatre Medal, the American Theatre Medal and the Victory Medal.

After his discharge from the Navy and with the assistance of the GI Bill, he enrolled in Syracuse University and graduated in 1949 with a degree in Business Administration. Syracuse University would become an important part of his life for the next 70 years as he was an ardent fan of everything Syracuse-related, including sports and the well-known graduates of the Newhouse School of Communications.

Most importantly, he met the love of his life at Syracuse, his wife of 72 years, Mary Brookwell. Mary also graduated from Syracuse and she married Fred on June 20, 1949, at Manning Chapel at Syracuse. They had three children, Karen Brookwell-Miller (Fred) of Palatine, Illinois, Frederick "Rick" John Brookwell and David Andrew Brookwell, both of Los Angeles, California, eight grandchildren, August Brookwell and Rachel Brookwell, Emma Miller (Andrew), Roxanne Miller (Kevin), Ariste (Andrew), Sophia, Xavier and Thalia Sallas-Brookwell, and one great-grandchild, Lucy, daughter of Emma.

After marriage, he started his employment at the United States Gypsum Company, a firm for which he worked for the next 38 years. During his time at USG, he rose in the executive ranks to become a Vice President of National Accounts and Marketing, finishing his career in Chicago at the corporate headquarters.

Upon retirement he and Mary build several homes on Hilton Head Island, South Carolina, where they had a vibrant social life that included lots of golf and visits from children and friends for the next twenty years. Fred was a fantastic golfer whose scorecards almost always ended up in the 70's and was known as a wonderful playing partner on any course with any level of golfer.

In 2012 Fred and Mary moved to the Winston-Salem area and eventually settled in Clemmons, NC, where they enjoyed golf, friends, and visits from family.

953 Salisbury Road, Mocksville, NC 27028
Published by Winston-Salem Journal on Jan. 14, 2022.
To plant trees in memory, please visit the Sympathy Store.
MEMORIAL EVENTS
To offer your sympathy during this difficult time, you can now have memorial trees planted in a National Forest in memory of your loved one.
MAKE A DONATION
MEMORIES & CONDOLENCES
0 Entries
Be the first to post a memory or condolences.