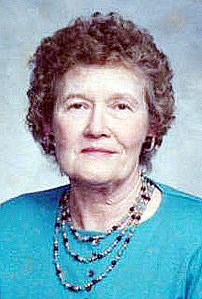 Isabelle Rogers Pagett, 101, passed away peacefully on the evening of October 5, at Arbor Acres United Methodist Church Retirement Community in Winston-Salem. Her husband, Robert Walton Pagett, preceded her in death on July 18, 1961, as did her daughter, Rebecca Jane Pagett on April 27, 2017, and stepdaughter, Mary Pat Roberts (Richard) on January 30, 2021.

Isabelle was born to George and Fannie Rogers, February 16, 1920, in Webster, NC, located in the foothills of the Great Smoky Mountains. The seventh of eight children, she was preceded in death by sisters Clara Bryant, Leona Caudle and Lavenia Page and brothers Paul, Alvin, Claude and Coy Rogers.

Isabelle came to Winston-Salem in 1937 and joined First Baptist Church, where she became active with young adult groups. Thereafter, she joined and for 73 years was a faithful member, known and loved by all, of Ardmore United Methodist Church. A dedicated and respected member and Worthy Matron of the Old Town Chapter #355 (previously Twin City Chapter #60) of the Order of the Eastern Star for 72 years, she also joined the Twin City Chapter #60 of the White Shrine, and held various leadership positions in each. She was the salutatorian of her Webster high school class and the recipient of Meredith College's Baptist Student Scholarship.

In 1941, Isabelle met her future husband, Walton, at the Anchor Company, where she was employed as a seamstress. She and Walton were married in May 1942 in Bowling Green, KY, and lived in the Twin Castle Apartments in Ardmore until buying a home nearby. Widowed at 41, she drew on her innate strength and faith in her Lord and transformed herself from the homemaker who had never learned to drive into a successful real estate broker and investor.

Always busy in the service of others, she worked unceasingly into her 90's, canning, baking, quilting, sewing and even mowing her own yard! She was dedicated to visiting, with special attention to shut-ins and those in need, and never arrived empty-handed. Isabelle was a generous and loving mother, grandmother, and great-grandmother who practiced the art of newsy, affectionate, encouraging cards and letters. She was an inspiration to her family and everyone who knew her, and she will be remembered with so much love and dearly missed.

120 S. Main St., Winston-Salem, NC 27101
Published by Winston-Salem Journal on Oct. 20, 2021.
To plant trees in memory, please visit the Sympathy Store.
MEMORIAL EVENTS
To offer your sympathy during this difficult time, you can now have memorial trees planted in a National Forest in memory of your loved one.
Funeral services provided by:
Salem Funerals & Cremations - Downtown
MAKE A DONATION
MEMORIES & CONDOLENCES
Sponsored by Salem Funerals & Cremations - Downtown.
0 Entries
Be the first to post a memory or condolences.