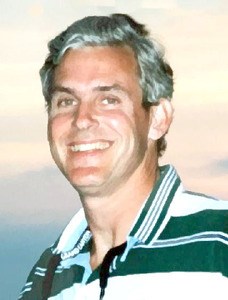 Jeffrey Charles Howland died suddenly at home in the arms of his wife, Lynn, after a quiet but fiercely determined battle with idiopathic pulmonary fibrosis and a subsequent lung transplant. Jeff had an inherent warmth, an infectious smile, an openness and a quick wit that drew people towards him. When describing Jeff, friends, family and colleagues spoke of his honesty, integrity, brilliance, loyalty, compassion and love. He was also a tremendous amount of fun.

Jeff was born on June 30, 1958 in Red Bank, New Jersey to George William Howland, Jr. and Dorothy Eagleson Howland. He grew up on the ocean in Rumson, New Jersey and shared a lifelong love of the sea with his mother. He was the fifth of seven children, 15 years younger than his only brother and sandwiched between his five sisters. His younger sisters remember careening down their steep front yard on sleds and go carts. His older sisters recall him spying on their dates and reporting back to their parents

When Jeff was thirteen, his family moved to Myrtle Beach, SC. Six weeks after he turned seventeen, Jeff flew to Tulane University where, in his own words, he majored in the "French Quarter." Sophomore year found him at Wake Forest University where he graduated with a B.A. in Economics in 1979 and made lifelong heart friends.

Jeff married Lynn Singleton Howland in 1983. They were on the opposite side of the same circle of friends at WFU. As fate would have it, they ran into each other at the Myrtle Beach Bachelor Club party just before Jeff was moving to Houston. That was date number one. After a year of long distanced dating, they got married on date number ten. Never before having spent two weeks together, they spent the next 38 years in a magical marriage as best friends. Rarely apart in their free time, they adored each other. Together they loved entertaining friends, travel adventures, fine dining, working out together, daily walks, books, relaxing on the beach and having a wonderful time raising and playing with their sons.

Jeff loved his boys. He felt so lucky to be the father of Jason and Ian and was an active dad to his sons. He and Lynn took the family on car trips all over the US enjoying adventures as varied as multi-day white water rafting/camping trips, hot air ballooning, mule rides down to the bottom of the Grand Canyon, scuba diving and wandering through meadows of wildflowers. Jeff particularly enjoyed his father/son weeklong sailing trips with Jason and Ian.

Jeff had a warm relationship with Lynn's parents and her extended family. He and her father, Ches, hiked many miles on the Appalachian Trail, including Maine's 100 Mile-Wilderness. On occasion, Ian would join them on the trail much to their delight. Jeff enjoyed his large Howland family and particularly looked forward to Howland reunions, which lit up his heart and his beautiful smile.

Jeff was generous with his time. He served as President of Forsyth Country Club and on the Senior Services Foundation Board. Perhaps as importantly, he sat on the floor and read to kindergarteners, tutored ESL students in Algebra, was an assistant scout master, organized and played backyard whiffle ball with the neighborhood children, worked the Junior League Rummage Sale, served as Treasurer for the Whitaker Elementary PTA, helped friends move, wrote beautiful handwritten notes of condolence and encouragement and, in general, was intentional in making sure he lived his life to positively impact his community, his family and his friends.

Jeff was an avid reader from an early age with an insatiable and lifelong appetite for learning. There was always a book in his hand at the end of the evening and he looked forward to discussing them with friends and family. Jeff had a love of music, often at loud volumes, that was a constant in his life. He was an excellent cook, and after transplant became the primary cook in his household. He was an avid gardener. Digging in the dirt was a creative outlet for him and a place of solace. He grew sunflowers that drivers stopped to admire and a beautiful vegetable garden. Though he would deny it, he particularly relished the yearly epic battles with the squirrels over his prized heirloom tomatoes.

Jeff loved to play - from board games to bridge; word games to bocci ball. He never minded losing but had a gleam in his eye when he won. He always had a NYTimes crossword puzzle going and a jigsaw on the game table. He loved golf but was wildly inconsistent. The one time he eagled #8, He called it a "Howland Sports Miracle."

Jeff was fortunate to have a beautiful group of friends, colleagues and family members, particularly, Holly and Bruce, that stayed the course with him leading up to and through his lung transplant process. We can never thank you enough. Finally, Jeff had four individuals, who at great sacrifice, isolated themselves for a year in order to be able to see Jeff inside without a mask. The Pod: Ann, Tree, Mark and Ian. You made him feel seen, safe and loved though Covid. Our hearts to yours.

Jeff will be greatly missed.

Condolences may be made online at www.salemfh.com.

120 S. Main St., Winston-Salem, NC 27101
Published by Winston-Salem Journal on May 30, 2021.
To plant trees in memory, please visit the Sympathy Store.
MEMORIAL EVENTS
To offer your sympathy during this difficult time, you can now have memorial trees planted in a National Forest in memory of your loved one.
Funeral services provided by:
Salem Funerals & Cremations - Downtown
MAKE A DONATION
MEMORIES & CONDOLENCES
Sponsored by Salem Funerals & Cremations - Downtown.
4 Entries
Lynn, I am so sorry. My thoughts and prayers are with you and your family.
Betty
Friend
June 2, 2021
To Jeff's family: My heartfelt condolences and prayers. I have worked with Jeff and am honored to have known him. Holding peace and comfort for you.
Doris Adams
Work
May 31, 2021
What a wonderful description of a wonderful man and a life that wasn't just well lived - it was fantastically lived. I am so sorry that his life was shorter than he deserved. I have been cheering for Jeff and his transplant all during the process. The obituary is a fabulous tribute to him.
Jodi Preslar
Friend
May 30, 2021
So sorry. Prayers go out to the family.
Scott Bauer
May 30, 2021
Showing 1 - 4 of 4 results