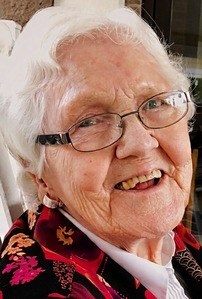 WINSTON-SALEM - Lounelle Selle, 92, died peacefully on June 23, at the Brookridge Retirement Community, her home for the past 25 years. She was revered by all who knew her as a joyous and caring woman who lived a life of true servanthood and left her mark on all who had the good fortune to cross her path.

Lounelle grew up the second youngest of 10 children on a farm in Rowan County (NC). After graduating in 1947 from Richfield High School, she was employed by Hanes Hosiery and moved to Winston-Salem. She soon became a star basketball and softball player on the company's world championship textile league teams and had the opportunity to travel throughout the world with them. During these times, she joined and became very active in North Winston Baptist Church and developed an interest in Christian education, and in 1954, she became the church's Minister of Education. A few years later, she took a similar position at College Park Baptist Church in Greensboro.

By 1962, Lounelle felt the need to pursue higher education. She applied and was accepted at Pfeiffer College. However, she put those plans on-hold when she had an opportunity to join the newly established Peace Corps in 1962. After four months of extensive training, she was given a two-year assignment to work in Bolivia, working closely with children and families in rural communities. Upon her return to the U.S., she immediately enrolled in Pfeiffer. After graduating in 1966, she enrolled in the Southern Baptist Theological Seminary in Louisville (KY). Three years later with her master's degree, she accepted a position at Hocutt Baptist Church in Burlington as their Director of Christian Social Ministries and Education – and then accepted a similar position in Decatur (GA) at Columbia Drive Baptist Church. Her work at both churches included developing badly needed weekday programs for children from low-income families.

In 1973, Lounelle began exciting new work with the Baptist Board of Foreign Missions with a four-year term in Taiwan as Student Director, where she worked primarily with university students. When she returned to the U.S. in 1977, she worked at Bowman-Gray Medical Center at Wake Forest, where she started a clinical pastoral program. But her work in Taiwan was not done, and she returned there for a second four-year term beginning in 1979, this time working with children and their families.

Upon her return to the U.S., she accepted what she called her "dream job" as Clinical Staff Chaplain at the Baptist Medical Center in Birmingham, Alabama, where she worked until her retirement in 1994. Lounelle focused most of her time on ministering and caring for people who were terminally ill. She called this work "the culmination of my life's work."

Upon her retirement, she returned to Winston-Salem. But she missed the hospital work and soon took what she called a "part-time retirement position" at Wake Forest Baptist Hospital, where she worked at the front desk greeting people as they entered the hospital. It's work she loved and continued to do for several years until she retired for good in 1999.

Lounelle is survived by a large family of nephews, nieces, and friends all across the world. She was preceded in death by her nine brothers and sisters: Maxine, Bud, Ruby, Charles, Verla, Spencer, Leroy, Mary Ann, and Sarah.

Friends and family will gather to celebrate Lounelle's life this coming Saturday, June 26, 2:00pm, at Mt. Tabor United Methodist Church, 3543 Robinhood Rd, Winston-Salem, NC. There will be a reception immediately following the service.

In lieu of flowers, Lounelle Selle has asked that memorials be made in her memory to: The Pfeiffer Fund - Pfeiffer University, Attn: Advancement – P.O. Box 960 – Misenheimer, NC 28109.
To plant trees in memory, please visit our Sympathy Store.
Published by Winston-Salem Journal on Jun. 24, 2021.
MEMORIAL EVENTS
No memorial events are currently scheduled.
To offer your sympathy during this difficult time, you can now have memorial trees planted in a National Forest in memory of your loved one.
MAKE A DONATION
MEMORIES & CONDOLENCES
3 Entries
I became acquainted with Lounelle through my mother-in-law, Aleen Wilkinson Hutchins. She and Aleen played basketball together on the Hanes team, attended church together at North Winston, saw each other while volunteering at Baptist Hospital and lived right down the hall from each other at the Brookridge Retirement Home. They were close through the years. When I went to see Aleen, we would always visit with Lounelle too which was a joy and treat because she was so full of life and had so many wonderful stories to tell. She was a gifted lady who will be missed by everyone who knew her. I feel blessed to have met her. May our Heavenly Father, who now surrounds Lounelle with His Holy Presence, also enfold all of her family and friends with His Comfort & Peace as you continue your healing journey. Sincerely, Terry Whitley Firle
Terry Whitley Firle
Other
July 7, 2021
Lounelle. . . such an uplifting, exuberant individual!!
Susan Griffin Worth
Family
June 24, 2021
I received an email from My church, Mt. Tabor UMC, that Lounelle had died. It broke my heart. My mother and Lounelle were great friends, and they were in the same Sunday School class. Lounelle played basketball with my Aunt Hazel for Hanes Hosiery, and knew my Mama´s brother, Hazel´s husband, Jack Phillips. Mama and I would visit Lounelle at Brookridge. Mama died on Christmas Day, 2018. I sent Lounelle a card, earlier this year, on behalf of the church. We loved Lounelle so much. This is so very sad, but I know she and Mama are enjoying their Heavenly home.
Judy Carter MacDonald
June 24, 2021
Showing 1 - 3 of 3 results