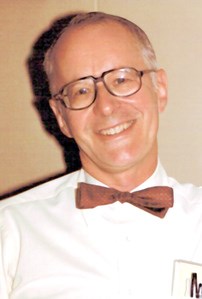 Richard (Dick) B. Patterson died on September 18, 2020 in Winston-Salem, N.C. Dick was born March 11, 1930 in Norfolk, Virginia and grew up in Bluefield, West Virginia. He was preceded in death by his parents Raymond and Marguerite Patterson, sister Jean Page, and his first wife Nancy Freeman Patterson. Dick was educated at the McCallie School in Chattanooga, Tennessee, Davidson College and The Bowman Gray School of Medicine (now Wake Forest University School of Medicine). He received his pediatric training at the N.C. Baptist Hospital in Winston-Salem, the N.C. Memorial Hospital in Chapel Hill, as well as a fellowship at The Hospital for Sick Children, Great Ormond Street in London, England. Following two years of general pediatrics practice in the Navy at the US Naval Hospital, Great Lakes, Illinois, Dick returned Winston-Salem in 1960 and started The Children's Cancer Program at The Bowman Gray School of Medicine which he monitored for the next 31 years. He was fortunate to be an active participant in the early national programs to find a cure for childhood cancer, particularly acute leukemia whose average survival rate in 1960 was 9-10 months and improved to a cure rate of 85% by 1991. His approach to childhood cancer was to "cure sometimes, relieve often and comfort always."

Dick was active locally in the American Cancer Society and in the early years of hospice. After 1991, he participated as a facilitator in the first year medical student program. He volunteered at Crisis Control Ministry and Meals on Wheels. A long term member of Trinity Presbyterian Church, he served as deacon, elder, and Sunday School teacher. He enjoyed long walks in the mountains with his wife and collie dogs, locating and photographing wild flowers. He supported Friends of the Blue Ridge Parkway and The Blue Ridge Parkway Foundation. Dick is survived by his wife Jeanne Ross Patterson, daughter Linda Patterson Morris (Jeff), Atlanta, GA; sons Bruce Patterson (Kim Giese), Princeton, NJ and Mike Patterson, Missoula, MT as well as 4 grandchildren and 8 great grandchildren. There will be a socially distanced drive by visitation at 2:00 pm Wednesday at Trinity Presbyterian Church, 1416 Bolton Street. In lieu of flowers, donations may be made to The Children's Cancer Fund Office of Development, PO Box 571021 Winston-Salem, NC 27157.