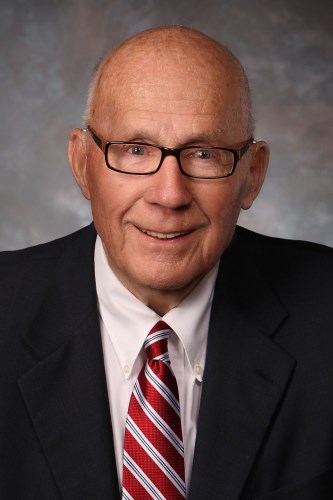 Dewey was the son of William and Susie (Schregardus) Westra. He is survived by his loving wife, Lois, (DeGroot); and his three sons, Steve (Kathy Bille), Paul (Sharon Visscher) and Jonathan (Karen Lagerwey); as well as a step-daughter, Mary Buwalda Soodsma (Scott). Dewey loved his family and immensely enjoyed spending time with his 11 grandchildren and 34 great-grandchildren. Dewey was preceded in death by his parents and by his son, David.

Dewey was very active in his church, his community and his business. He served faithfully for many years as an elder and a deacon, taught Sunday School and led Cadets. He served on the boards of Waupun Christian School, Central Wisconsin Christian School (including serving on the committee to form the school), and Wayland Academy. He also served on the Foundation Board for Christian Schools International. He formed Westra Construction in the late 1940s with his father. Additionally he was a charter member of the Wisconsin branch of Associated Builders and Contractors, served two terms as the president of the association, and served on their national board as well. He was a recipient of the Wes Meilahn Award through ABC. He was also a People to People Ambassador to China representing the construction industry.

Dewey, with Lois, was an active volunteer. He was an active member of the Gideons for over 20 years and participated in distributing Bibles in Ethopia. He served at Wycliffe Bible Translators in Tuscon, Ariz., volunteering for more than 23 winters. He helped build housing and similar projects for missionaries.

Dewey was deeply loved and appreciated by his family and will be greatly missed. However, the family is reassured by the testimony of faith that he consistently gave throughout his life and know that he is now in the presence of his Heavenly Father.

Funeral services will be 11 a.m. Saturday, Sept. 18, 2021 at Langeland-Sterenberg Funeral Home, 315 E. 16th St. Holland with the Rev. James H. Scholten officiating. Burial will be in Pilgrim Home Cemetery. Visitation will be Saturday, from 9:30 a.m. until 10:45 a.m. prior to the service. Memorials can be given to Wycliffe Bible Translators or the Christian School of your choice. To leave a condolence and more information, please visit www.langelandsterenberg.com.

Published by WiscNews.com on Sep. 15, 2021.
To plant trees in memory, please visit our Sympathy Store.
MEMORIAL EVENTS
Sep
18
Visitation
9:30a.m. - 10:45a.m.
Langeland-Sterenberg Funeral Home
315 East 16th Street, Holland, MI
Sep
18
Service
11:00a.m.
Langeland-Sterenberg Funeral Home
315 East 16th Street, Holland, MI
Funeral services provided by:
Langeland-Sterenberg Funeral Home
MAKE A DONATION
MEMORIES & CONDOLENCES
Sponsored by Langeland-Sterenberg Funeral Home.
9 Entries
Sorry to hear of Dewey's passing. We shared many good times together while working at Wycliffe. May the Lord give you comfort, Lois.
Dolly Van Loo
September 16, 2021
Rita and I have many fond memories of Dewey. He and Lois were the elders who welcomed us to Central Ave Church. I served with Dewey on various committees and appreciated his wealth of wisdom based upon his many years of service. He is at peace, now, and we will really miss him. Our prayers are with you, Lois, and your family.
Tom and Rita Bird
Friend
September 16, 2021
Our sincere condolences to the family of Dewey. I had the privilege of working for him for several years, his leadership was well known. Our prayers are with the family.
Wayne TeBeest
September 15, 2021
I am so grateful to have known Dewey and visited with him in his later years. He certainly left a legacy of faith. My deepest sympathies to his loved ones. So thankful for the blessed assurance we have of eternity with Jesus! Sincerely, Cindy Nyhoff, Chaplain
Cindy Nyhoff
September 15, 2021
Lois, So sorry to learn of Dewey's passing. May you find peace and strength during this difficult time.
Ruth Klungle
Friend
September 15, 2021
Dear Lois & family, so sorry to hear of Dewey's passing. Will always remember our good times together. Our prayers for strength & peace continue for you & your family.
Sharon & Don DeMotts
Family Friend
September 15, 2021
Sincere Sympathy for the loss of your Husband, Dad, and Grandfather.
Keeping you in our thoughts and prayers.
Phil and Sue VandeKolk
Phil and Sue VandeKolk
Family
September 15, 2021
Praying for peace and comfort during this time. Dewey was amazing and will be so greatly missed. Alex and I love you lots, Lois.
Melanie Lotterman
Family
September 14, 2021
My prayers and sympathy to your family. I have great memories of him at the Atrium a kind man.
Kathy Smith
Friend
September 14, 2021
Showing 1 - 9 of 9 results