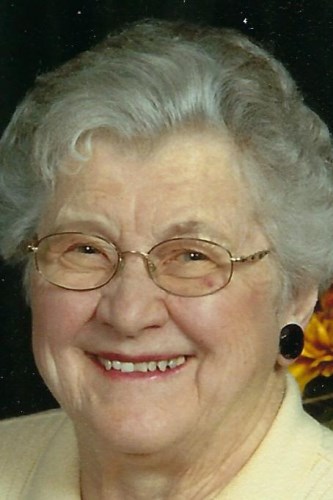 COLUMBUS - Doris K. Dingee age 98, died on Saturday, Sept. 18, 2021 at Prairie Ridge Health in Columbus. She was born to Henry and Evelyn Krenz on May 29, 1923 in Columbus. Doris graduated from UW-Whitewater where she earned her teaching degree and then taught for a short time. She was married to Lester Robbins on May 18, 1947 in Columbus and had two sons. He passed away in 1969. In 1973, Doris was married to John Dingee in San Francisco. She was employed for 25 years as a teller and supervisor at the Columbus branch of AnchorBank. She was an active community resident where she volunteered for the hospital auxiliary while also serving nine years on the board of directors at Columbus Community Hospital. Doris enjoyed golfing at the Columbus Country Club where she was a long time member. She also was an avid sports fan, especially the Packers, Brewers, Badgers, Bucks and Columbus Cardinals. Her massive collection of bells is 3000, give or take. Doris was an active and faithful member of the Olivet Church and its social circle. Survivors include her son, Richard Robbins of Rockford, Ill.; five grandchildren, David (Heidi) Robbins, Andy (Sheila) Robbins, Nena (Zach) Davis, Kimberly Robbins, Meredith Robbins; six great grandchildren, Brookelyn, Brody, Gracie, Maeve, Paul, Luke; sister, Inez McMillan of Beaver Dam; daughter-in-law, Carol Robbins of Muskego; and former daughter-in-law, Deb Robbins; nieces, nephews, step children, other relatives and friends. She was preceded in death by her parents; husband, Lester; husband, John in 2001; son, Donn Robbins in 2020. Funeral services will be held at 11 a.m., with visitation beginning at 10 a.m., on Thursday, Sept. 30, 2021 at the OLIVET CONGREGATIONAL UNITED CHURCH OF CHRIST, Columbus.

The Rev. Ruth Bradshaw will officiate. Interment will be in Hillside Cemetery, Columbus. Memorials directed to the Olivet Church or Prairie Ridge Health are appreciated. Her family would like to thank the wonderful staff at Home Again. Please share your online condolences with Doris' family at jensenfuneralandcremation.com

Published by WiscNews.com on Sep. 27, 2021.
To plant trees in memory, please visit the Sympathy Store.
MEMORIAL EVENTS
Sep
30
Visitation
10:00a.m.
OLIVET CONGREGATIONAL UNITED CHURCH OF CHRIST
Columbus, WI
Sep
30
Funeral service
11:00a.m.
OLIVET CONGREGATIONAL UNITED CHURCH OF CHRIST
Columbus, WI
Funeral services provided by:
Jensen Funeral & Cremation - Columbus
MAKE A DONATION
MEMORIES & CONDOLENCES
Sponsored by Jensen Funeral & Cremation - Columbus.
2 Entries
Mrs. Dingee was a really nice lady. She lived at Home Again where my father also lives so my sister, Jillann, and I had occasion to visit with her once in a while and she was so pleasant to visit with! She will be missed at Home Again, that's for sure. My sympathy to Richard and her entire family. She was truly a gem!
Rhonda Warren
Friend
September 28, 2021
Grief can be so hard, but our special memories help us cope. Remembering you and your loved one today and always.
Mae
September 24, 2021
Showing 1 - 2 of 2 results