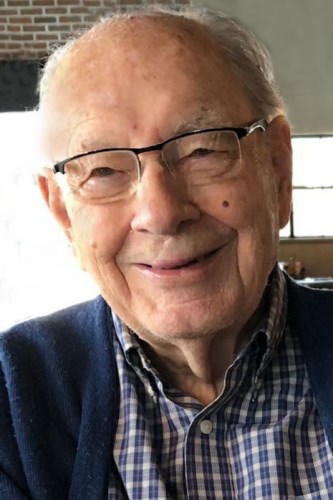 BARABOO - James Karch, age 93, passed away peacefully on Friday, Nov. 13, 2020, at a family house in Merrimac, where he has spent time in recent weeks with his children, grandchildren, pastor and caregivers.

Jim was born in Hartford, Wis., in 1927, the youngest of three children of teachers Charles and Lillian Karch. After Charles left teaching, the family moved several times during the depression, including to Merrill and Baraboo, Wis., and Monroe, Mich. After his father's death, Jim and his mother returned to Madison where Jim graduated from West High School. He served briefly in the U.S. Navy in 1945 before attending the University of Wisconsin-Madison for both undergraduate and law school, graduating in 1952.

He was introduced by a friend to nurse Marilyn Lepley, and they were married in 1953 and settled in Baraboo, where he had begun practice with the law firm Langer and Cross. After several years he began a long solo practice before being elected Circuit Court Judge for Sauk County in 1975. He served as a Judge in Sauk, Forest and Florence Counties. In what may have been the favorite part of his law career, his final work was as a substitute judge in over 50 of Wisconsin's counties. He was a very conscientious judge, deliberate and careful in his analysis and rulings, considerate to parties, witnesses, jurors and anyone else in the courtroom and focused on timely decisions so participants could get on with their lives outside the courtroom. Early to work, even as a visiting judge, he startled staff who would find him sitting on the courthouse steps drinking coffee when they arrived to open for the day.

Jim was dedicated to community service throughout his life, including serving as a Scout Leader (before his sons were in Scouts), leader in Kiwanis, member of the Baraboo City Council, on the Committee which led to the creation of Boo U (Baraboo-Sauk County Campus of UW-Platteville), guide at the Circus World Museum, director of the Friends of Devil's Lake, and driver for Meals on Wheels.

Jim was an engaged father, teaching his children piano, arithmetic and games, and taking the family to enjoy natural beauty, especially Devil's Lake and a woodlot in Honey Creek, and historic sites, including the Circus World Museum several times each year. He also organized and led the family on activity-packed family trips to Yellowstone, Florida, New York and California. Jim and Marilyn's middle child, Kimmy, died of leukemia when five years old, a loss that stayed with Jim and Marilyn all their lives. Jim and Marilyn were very active after their children were grown, including extensive travel and camping with a Road Trek van, a summer living and working at Old Faithful in Yellowstone, and frequent visits to Devil's Lake to hike and swim. They also spent a lot of time with grandchildren, on trips, attending sporting and music events, playing games and providing much needed extra help to granddaughters with special needs.

Jim was a musician, playing trumpet in big band swing music in high school, in the Navy, as an undergraduate, as a law student and continuing after he moved to Baraboo. After that he played the trumpet in church and in a family band with his children and grandchildren, many of whom became good musicians with the help of his encouragement and teaching. He was also an actor, appearing in many Baraboo Theater Guild productions, including as Mayor Shinn in his favorite musical, "The Music Man."

The family thanks the many caring people in the Baraboo community who helped Jim, especially over the past several months, including the residents and staff of Oak Park Place, and the staffs of the SSM Health System, BrightStar Care and Agrace HospiceCare.

A family graveside service was held on Monday, Nov. 16, 2020, with Pastor Lisa Newberry presiding. The family is hoping to hold a Celebration of Life at First Presbyterian Church in Baraboo in August.

The family suggests that donations, in lieu of flowers, be made to First Presbyterian Church of Baraboo or Friends of Devil's Lake. Baldwin Funeral Services of Baraboo is assisting the family.

To plant trees in memory, please visit our Sympathy Store.
Published by WiscNews.com on Nov. 21, 2020.
MEMORIAL EVENTS
No memorial events are currently scheduled.
To offer your sympathy during this difficult time, you can now have memorial trees planted in a National Forest in memory of your loved one.
GUEST BOOK
0 Entries
Be the first to post a memory or condolences.