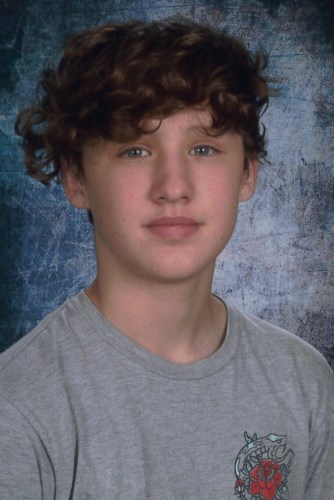 Jase was born the son of Jason A. and Michele (Anderson) Luther on July 11, 2005, in Columbus. He attended Columbus High School. Jase enjoyed playing hockey for many years with Beaver Dam Hockey. He was a caring person with a wonderful sense of humor. Jase loved spending time with his sister, Samantha, and cousin, Josh.

Jase is survived by his mother, Michele Luther (fiancé, John Schwoch) of Fall River; sister, Samantha Luther of Beaver Dam; grandparents, Don and Sandy Anderson of Mukwonago and Glen and Sandy Luther of Rio; aunts, Cheryl Uszler and Amy (Troy) Nielsen; step-grandparents, Don and Sherry Schwoch; step-siblings, Raynie and Colten Schwoch; a special cousin who was more like his brother, Josh Uszler; as well as other cousins and friends. He was preceded in death by his father, Jason, in 2005.

A celebration of life gathering will take place at the KOEPSELL-MURRAY FUNERAL HOME in Beaver Dam from 11 a.m. until 2 p.m. on Saturday, Jan. 22. A burial will take place at St. Patrick's Cemetery in Doylestown at a later date. The wearing of face coverings is strongly encouraged.

Koepsell-Murray Funeral Home in Beaver Dam is serving the family. Online condolences may be made at www.koepsellfh.com.

Published by WiscNews.com on Jan. 15, 2022.
To plant trees in memory, please visit the Sympathy Store.
MEMORIAL EVENTS
Jan
22
Celebration of Life
11:00a.m. - 2:00p.m.
Koepsell-Murray Funeral & Cremation Services, Beaver Dam
Koepsell Funeral Home North Crystal Lake Road, Beaver Dam, WI
Funeral services provided by:
Koepsell-Murray Funeral & Cremation Services
MAKE A DONATION
MEMORIES & CONDOLENCES
Sponsored by Koepsell-Murray Funeral & Cremation Services.
6 Entries
Michele and family, My deepest sympathy for your loss of Jase. May you find peace and comfort during this sad time and the days ahead in the wonderful memoies you have of Jase.
Yvonne Braaksma
January 18, 2022
I remember Jase showing to art class in middle school with his Arizona Tea hoodie-or his Ramen Noodle hoodie. He was always the funniest guy there and made us all laugh in every class. He will be missed.
Courtney Genova
January 17, 2022
Sending prayers and hugs to the family. We are so very sorry to hear of your loss.
Tom & Angie Maloney
Family Friend
January 14, 2022
Michelle And Family My Deepest Sympathies to you and your family Thinking about you All Hugs My heart aches for you Jase you will be Sadly Missed by Me im glad I got to no you I'm just list on Words R.I.P Till we meet Again ❤
Cheryl
Cheryl Hoffman Hoffman
Friend
January 14, 2022
When we lose a life on earth, we gain an angel in heaven. Sincere condolences to your grieving family for the immeasurable loss you suffered.
Shirley Drouin
Acquaintance
January 14, 2022
Michele & families. I'm thinking of you all at this sad time. Jase is resting ing the arms of our Lord ✝
Sandra Hardy
Friend
January 15, 2022
Showing 1 - 6 of 6 results