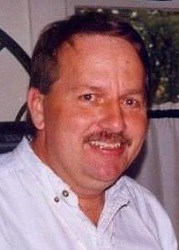 Jim was born on Feb. 21, 1955, in Portage, the son of Robert and Marion (Kopplin) Hayes. He graduated from Portage High School in 1973. Jim worked at AMPI in Purchasing, and retired as a Cheese Grader. He loved watching sports, especially NASCAR. Jim had a special love for his pet, Nia.

He is survived by his son, Steven (Reeti) Hayes; his sisters, Cynthia Wilkins, Sandra (Robert) Alexander, Patricia (Jeff) Schehr, Kristen (William) Atkinson, and Tammy (Jefferson) Olson; his nieces, nephews, other relatives and many close friends. Jim is further survived by his former wife and dear friend, Signa "Punky" Schaitel. Jim was preceded in death by his parents.

Private family services will be held at Pflanz Mantey Mendrala Funeral Home in Portage, (www.pmmfh.com). A Celebration of Life will be held and announced at a later date.

The family would like to give special thanks to Jami Hayes McAfee for her special support.

Published by WiscNews.com on Sep. 21, 2021.
To plant trees in memory, please visit the Sympathy Store.
MEMORIAL EVENTS
To offer your sympathy during this difficult time, you can now have memorial trees planted in a National Forest in memory of your loved one.
Funeral services provided by:
Pflanz Mantey Mendrala Funeral Home - Portage
MAKE A DONATION
MEMORIES & CONDOLENCES
Sponsored by Pflanz Mantey Mendrala Funeral Home - Portage.
0 Entries
Be the first to post a memory or condolences.