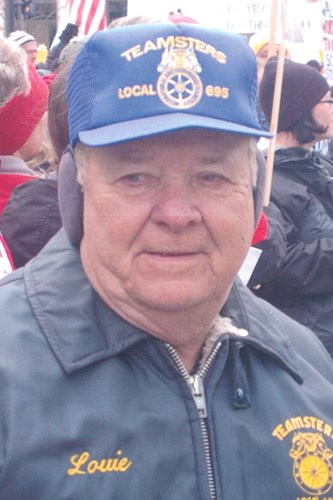 The visitation will be a Koepsell-Murray Funeral Home in Beaver Dam on Saturday, Sept. 19, 2020 from 9:30 a.m. until 10:50 a.m. The funeral service will follow at 11 a.m. with seating limited to 50 people. Rev. Bruce Wietzke will be officiating and burial will be at Highland Memory Gardens in the Town of Trenton, Dodge County, Wis. Military Honors will be provided by the Lowell VFW. A reception will be held at the Lowell VFW Hall on Saturday at 12:30 p.m.

Louis Raymond Firari was born on Oct. 3, 1931 to Louis and Ethel (Wiegert) Firari in Lowell, Wis. He joined the United States Army and received at Purple Heart for his service during the Korean War. Louis traveled all over the world during his time in the service. He held various positions, including being a guard at Fort Leavenworth Kansas Prison. After the service, Louis worked for Carnation Company in Oconomowoc. His most notable work was as the recording secretary/treasurer for the International Brotherhood of Teamsters, Local 695. While with Teamsters, Louis was the negotiator and played a pivotal role in equal pay for women in the workforce. In his spare time, he spent time with his children and grandchildren, deer hunting, and having good times.

Louis is survived by his better half, Kathy Strand of Cottage Grove; his children, René (Frank Will) Firari-Will, and Richard (Dalene) Firari; grandchildren, Seth (Rebi), Cody, and Shanda Will, Clinton and Kevin Firari and Kerry (Paul) Beeney; and two great grandchildren. He is further survived by his brothers and sister, Nancy (John) Dippong, Herman (Delores) Firari and Milton Firari; nieces, nephews, other relatives and friends. He was preceded in death by his parents; seven siblings; his sons, Gary and Kevin; and his former wife, Jana Firari.

To plant trees in memory, please visit our Sympathy Store.
Published by WiscNews.com on Sep. 17, 2020.
MEMORIAL EVENTS
Sep
19
Visitation
9:30a.m. - 10:45a.m.
Koepsell-Murray Funeral Home
N7199 N. Crystal Lake Road, Beaver Dam, Wisconsin
Sep
19
Funeral service
11:00a.m.
Koepsell-Murray Funeral Home
N7199 N. Crystal Lake Road, Beaver Dam, Wisconsin
Funeral services provided by:
Koepsell-Murray Funeral & Cremation Services
GUEST BOOK
3 Entries
Rene, i am so sorry for the loss of your father. Debbie Neuman (Frank). Please write to me at W10202 Surfside Drive Beaver Dam.
Debbie Neuman
Friend
September 19, 2020
Kathy, Were so very sorry for the loss of Louis. What a wonderful, kind, man he was! Skip & I have many great, happy, fun memories of you both, over the yrs! From hunting, snowmobiling, our get togethers! Rides! Laughs! Our thoughts and prayers go out to you, and his family, and many friends! God Bless you all, we'll always remember him! I pray you'll find peace and comfort as time go on!
Skip and Linda Hanson
Friend
September 18, 2020
Kathy
I'm so incredibly sorry to hear about Louie. He was such a sweetheart and a wonderful partner for you for so many years. May you find peace in comfort in the days and weeks ahead.
Love,
Barb
Barbara Graverson
Friend
September 17, 2020