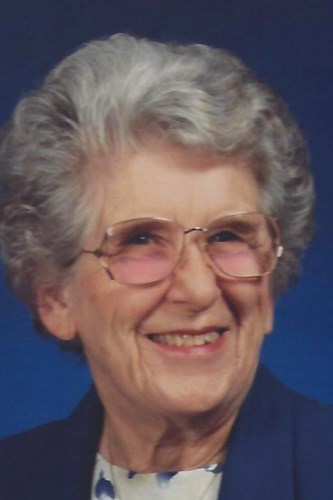 COLUMBUS - Minerva L. (Meyer Diekvoss) Batt, age 101, died on Sunday, Sept. 6, 2020, at Home Again Assisted Living in Columbus. She was born on July 17, 1919, the daughter of Edward and Hattie (Witt) Meyer, in Ripon. She graduated from Ripon High School and went to work at Barlow & Seelig Mfg. Co. in Ripon. Minerva was married to Clair Diekvoss in 1940. He died in 1941. She attended Ripon College and North Central College in Naperville, Ill., graduating in 1947. Minerva was married to Rev. Samuel Batt in 1946 and served with him in five parishes in Northern Illinois in Wood Dale, Dixon, Villa Park, Barrington, and East Side Chicago. In retirement, the couple moved to Columbus where she tutored 7th grade girls in math in her later years. She has been very active in the Columbus United Methodist Church. She taught school, performed office work and served as an officer in the Women's Society of World Service in the Evangelical United Brethren Church and later in the successor-The United Methodist Women of the United Methodist Church. Minerva leaves her two daughters, Phyllis (Jeffrey) Jackson of Elkhorn, Neb., and Janis Batt of St. Paul, Minn.; one granddaughter, Catherine (Matthew) Bosley; two great-grandsons, Kobe and Jackson; two great-granddaughters, Madison and Luella, all of Gretna, Neb.; one sister-in-law, Barbara Meyer of Ripon; many nieces, nephews, other relatives and friends. She was preceded in death by her parents; husband, Sam in 2019; a grandson, Christopher Jackson; two sisters, Evelyn Brasch, LaVerne Kenas; and one brother, Arthur Meyer. A private family funeral service was held on Thursday, Sept. 10, 2020. Rev. Jim Cotter officiated. Inurnment will be in Woodlawn Cemetery, Ripon. Memorials can be made to the United Methodist Church or the United Methodist Women. Online condolences may be made at jensenfuneralandcremation.com.

To plant trees in memory, please visit our Sympathy Store.
Published by WiscNews.com on Sep. 12, 2020.
MEMORIAL EVENTS
No memorial events are currently scheduled.
To offer your sympathy during this difficult time, you can now have memorial trees planted in a National Forest in memory of your loved one.
Funeral services provided by:
Jensen Funeral & Cremation - Columbus
GUEST BOOK
0 Entries
Be the first to post a memory or condolences.