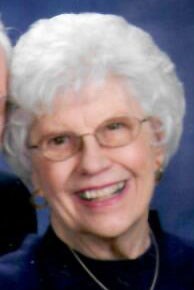 As per Patsy's wishes, graveside services were held at 2 p.m. at Holy Sepulchre Cemetery on Monday, June 7.

Patsy was born April 18, 1928, in Wisconsin Dells, to Oscar and Kathryn (Hayes) Anderson. She married John Edward Gambill in Crandon, Wis. He preceded her in death on April 24, 2020. She is survived by her cousin, Don Gavinski, Milwaukee, Wis.

Patsy grew up as an only child in an idyllic life in the Dells, doted on by her parents and uncle and aunt, Arthur and Alma Buckley. They owned the Finch Hotel where Patsy helped register guests, carry luggage, concierge and clean rooms. Patsy met John one summer while he was a guide on the Wisconsin Upper Dells tour boats.

Patsy graduated from Wisconsin Dells High School in 1945, Edgewood College in 1947 and the University of Wisconsin in 1950. She completed post-graduate work at Illinois State University and University of Illinois. She followed John to Mattoon, Ill., where she taught school and he began his law practice. They moved to Rantoul, where she began teaching for the Rantoul City Schools. Her focus was reading. She touched the lives of many young people in their formative years and remembered them through life. She retired in 1986. The extent of John and Patsy's anonymous benevolence has and will continue. Patsy and John traveled extensively throughout the United States and other countries. In later years, he was her eyes and she was his foundation. Patsy was able to remain in her home of over 60 years through her dedicated team of caregivers: Anna C, Anna K, Donna, Emily, Eunice, Lori, Mila, Sharon and Vickie. She also received excellent and compassionate care at OSF Heart of Mary Medical Center, Urbana.

Patsy was devoted to the Catholic faith, and she and John were faithful members of St. Malachy Catholic Church, Rantoul.

To plant trees in memory, please visit our Sympathy Store.
Published by WiscNews.com on Jun. 10, 2021.
MEMORIAL EVENTS
No memorial events are currently scheduled.
To offer your sympathy during this difficult time, you can now have memorial trees planted in a National Forest in memory of your loved one.
Funeral services provided by:
Lux Memorial Chapel
MAKE A DONATION
MEMORIES & CONDOLENCES
Sponsored by Lux Memorial Chapel.
0 Entries
Be the first to post a memory or condolences.