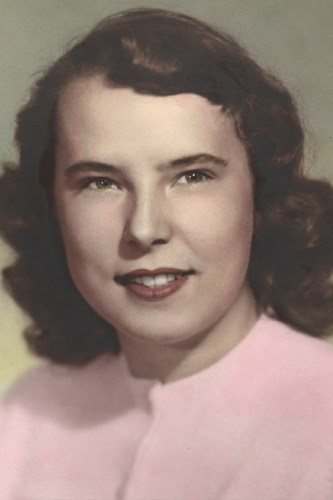 Pat spent her youth in Stevens Point, Kimberly, Briggsville, and Baraboo, Wis. Her father moved the family for his work at the Badger Army Ordnance Plant during World War II and the Korean War.

Pat graduated with honors from Kimberly High School, Kimberly, Wis., in 1957, where she excelled at math and Latin. Her intentions were to attend Marquette University; however, she met the love of her life, John P. Mueller. They were united in marriage at St. Joseph Catholic Church, in Baraboo, on Aug. 24, 1957. Together, they raised seven sons on Pine Island Farm, Inc., which they purchased in 1969 in the Township of Caledonia, Portage, Wis.

Pat was a devout Catholic and taught CCD at Durward's Glen. She was a 4-H leader, served on the board of directors for Alto Creamery, became a certified breeder of cattle, as well as treasurer of Caledonia Township.

She enjoyed creating tasty food from her labor in the gardens, growing and sharing colorful flowers, crafting items she sewed, shared and sold, in addition to creating all the memories with the family. Pat taught many grandchildren to bake bread, cookies and pies, as well as sewing and crafting. She loved music, playing the piano and often humming or whistling a tune.

In addition to her parents, Lawrence and Cecelia, and husband, John, of 58 years, Pat was preceded in death by a sister, Elaine Martin; brothers, Lawrence and Leroy; daughter-in-law, Lana Mueller; father- and mother-in-law, Valentine and Irene (Grueber) Mueller; and other family members.

A Mass of Christian Burial will take place at 11 a.m. on Saturday, Dec. 4, at ST. JOSEPH'S CATHOLIC CHURCH, 304 East St., in Baraboo, with Father Jay Poster officiating. Visitation will be at the church on Saturday from 10 a.m. until time of Mass, with a Rosary at 9:30 a.m. Interment will take place at a later date.

The family would like to thank the staff of Oak Park Place in Baraboo for their compassionate care given to Pat during her stay. Baldwin Funeral Services is assisting the family with arrangements.