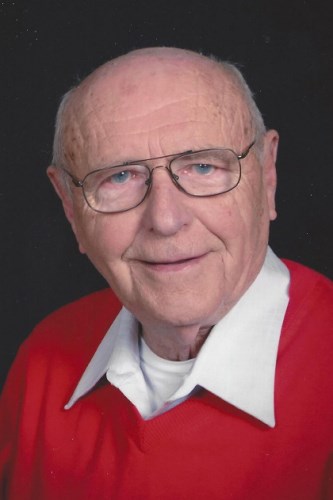 MOUNDVILLE - Born in the Township of Moundville on April 2, 1931, Paul Sylvester Wade was called to his eternal home on Thursday, April 1, 2021. At 89 years old, he was only three hours short of celebrating his 90th birthday! Paul lived in Moundville his entire life, where he graduated as a salutatorian with the Class of 1949 from the Endeavor High School. Paul entered the U.S. Army upon high school graduation, serving during the Korean War. He enjoyed talking about his time stationed in Greenland and the Panama Canal. Paul married Barbara Jean Hodge on June 23, 1956.

A farmer at heart, Paul left farming in 1970 to start Wade Implement in Endeavor. In 1978, he was proud when he and his brother, Howard, built a new building in Endeavor. As an Allis-Chalmers dealer, his favorite color was orange! Paul was a lifelong member of the Moundville United Methodist Church and served in many church leadership roles. He enjoyed his public service. He served on the Portage School Board and was an assistant chief for the Endeavor Fire Department. He proudly served on the Marquette County Board of Supervisors for 46 years and was chair for eight years, also serving on the Winnefox Library Board. He was a member of the Portage Curling Club and enjoyed many years of playing cards in a couples card league for farmers.

He loved his family and his church family. He enjoyed antique tractors and was an avid reader, and was quite the speed reader! He would read books faster than we could supply them! He enjoyed spending weekends at their cottage in Black River Falls, but was always ready to come home on Sunday mornings.

A private funeral service will be held at the Pflanz Mantey Mendrala Funeral Home (www.pmmfh.com), with the Rev. Aaron Alfred officiating. Interment will take place at the Moundville Cemetery as a private ceremony. Friends may call on Tuesday, April 6 at the PFLANZ MANTEY MENDRALA FUNERAL HOME in Portage from 4 p.m. until 7 p.m. Masks will be required and provided if necessary, and social distancing will be observed, with a limit of 50 people in the funeral home at one time.

In lieu of flowers, memorials may be made to the Moundville United Methodist Church.

The family would like to extend heartfelt thanks to Agrace HospiceCare for their kindness and care.