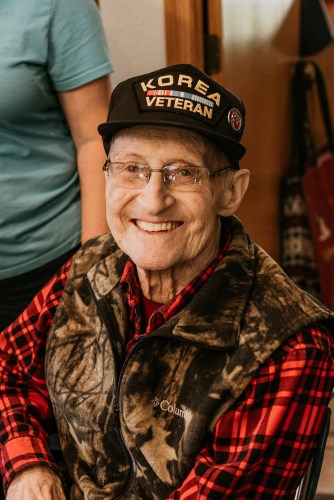 BARABOO - Phillip D. "Phil" Stopper, age 86, of Baraboo, passed away on Thursday, Nov. 12, 2020, at home. Phillip, son of Rollo and Ruth (Good) Stopper, was born April 2, 1934. He was a graduate of Baraboo High School, Class of 1952. Phil enlisted into the U.S. Army on Oct. 22, 1953, and proudly served until his honorable discharge on Oct. 4, 1955. Upon his discharge he received the National Defense Service Medal, United Nations Service Medal and the Korean Service Medal. On June 21, 1958, he was united in marriage to Jean O'Brien at Immaculate Conception Church in Truman, Wis. Throughout his working career he was employed by JI Case, American Motors, US Postal Service, Pierce's Grocery Store and Hein Warner until his retirement. Phil was an active member of the American Legion Post 26, participating in the Baraboo Veterans Honor Guard, Sauk County 40 and 8, was a Hunters Safety Instructor and was a longtime member of St. Joseph Catholic Church in Baraboo. In his free time, he enjoyed spending time outdoors, especially hunting, fishing and spending time at Devil's Lake. Phil loved spending time with his grandchildren and watching them participate in sporting events. He also enjoyed cheering on the Packers, Badgers and Brewers.

He was preceded in death by his parents; infant daughter, Mary; and many in-laws.

A Mass of Christian Burial will be held on Wednesday, Nov. 18, 2020, at 11 a.m. at ST. JOSEPH CATHOLIC CHURCH with Father Jay Poster officiating. Visitation will be held at the church from 10 a.m. until the time of service at the church. Military Rites will be conducted at the church following the Mass. Memorials may be made to the family to be used toward a charity in Phil's name. The Redlin Funeral Home is assisting the family.