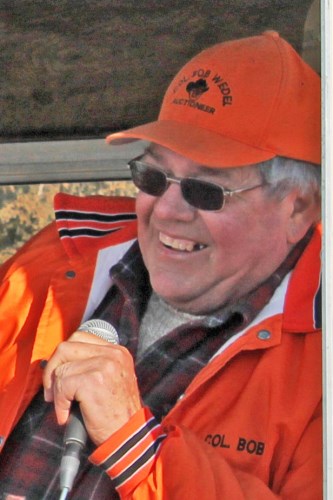 COLUMBUS - Robert P. "Col Bob" Wedel, age 77, passed away on Wednesday, Sept. 2, 2020. He was born Jan. 8, 1943, the eldest of Paul and Magdalena (Hauser) Wedel in Columbus. Bob graduated in 1960 from Columbus High School, and served in the National Guard until 1969. He was married to Kathy Pritchard on Nov. 14, 1964, and they welcomed their daughters, Patti and Nichole. They continued to work side by side in all of their many adventures.

In his earlier years, Bob had ownership in the Redbud Bowling Alley, Bob's Furniture Mart, Hard Heads Tap and CBW Livestock. In addition, he had pursued his pilot's license as well as raced both stock cars and harness horses.

In 1974, he graduated from Reisch Worldwide Auction College and found his true passion in auctioneering. His legacy, Bob's Auction Service, began as a small, family run business, holding their first consignment sale downtown Columbus in 1976. In addition to his beloved consignment sales, he had worked at Midwest Livestock Producers in Lomira, several car auctions, and held many household, farm, business and estate auctions over the years. He loved reminiscing about past auctions, always pointing out where there had been one. His children were part of the business since they were old enough to walk and have taken on more and more responsibilities over the years. Bob had worked to provide mentorship and direction to ensure his legacy could continue. One of Bob's favorite sayings was "If you do something you love, you never work a day in your life." Bob truly lived his life and loved every minute of it.

Bob loved spending time with, teasing, and providing for his wife, daughters and grandkids. He always seemed to know what they needed, even if they didn't think they wanted it. When he wasn't taking care of his family, he absolutely loved playing cards, rarely missing an opportunity to play euchre or sheepshead.

He was preceded in death by his parents; infant daughter, Constance; son-in-law, Steven Inglett; sister-in-law, Suzanne Wedel; and sister-in-law and brother-in-law, Ruth and Bob Obermeyer.

The family wishes to thank Beaver Dam and Lowell EMS and Marshfield Medical Center, Beaver Dam ER and ICU staff. A special thank you to Nathan Pollnow and all of Bob's other loyal friends and co-workers who have gone above and beyond to help the family in ways beyond measure during this difficult time. We are eternally grateful.

A private family service will be held with a public memorial to be held at a future date. Memorials will be organized by the family, setting up an FFA Alumni scholarship, as well as donations to The Lewy Body Dementia Association in memory of his mother. Please watch www.colbob.com for updates. We encourage you to share online condolences with Bob's family at jensenfuneralandcremation.com

To plant trees in memory, please visit our Sympathy Store.
Published by WiscNews.com from Sep. 8 to Sep. 12, 2020.
MEMORIAL EVENTS
No memorial events are currently scheduled.
To offer your sympathy during this difficult time, you can now have memorial trees planted in a National Forest in memory of your loved one.
Funeral services provided by:
Jensen Funeral & Cremation - Columbus
GUEST BOOK
5 Entries
Spent many a day as a kid in the bowling alley in Columbus. Bob taught me how to bowl and taught me how to fix the machines when they broke down. i will always remember when i was 12, he took 5 of us kids to a bowling tournament in Menasha. That memory will always live. As an adult, i looked forward to playing euchre with Bob when i came back to Wisconsin. I spoke with him the week before he passed, hoping to get together to play, as i was back in town. YOU WILL BE MISSED! Thank you, Bob.
Bob Koehn
September 13, 2020
That spectacular voice is forever stilled. Bob was truly one of the best
dennis austin reeve
September 12, 2020
So sad to hear of Bob's passing. He was always a hoot and fun to visit with. My deepest sympathy to all including Nichole who will always hold a special place in my heart.
Michael Eisenga
September 12, 2020
MY SYMPATHY TO THE FAMELY OF BOB WAS IN THE NG WITH HIM LONE TIME FRIEND WILL BE MISSED GOD BLESS WILL PLANT A TREE IN HIS MEMORY. JEST SAY WHERE.
LEROY & GENA SYDOW
September 8, 2020
We played sheepshead with him on Wednesday evening at the watermark in beaver Dam sorry for your loss he was a great guy
Kathy Woock & Charlie christian
September 6, 2020