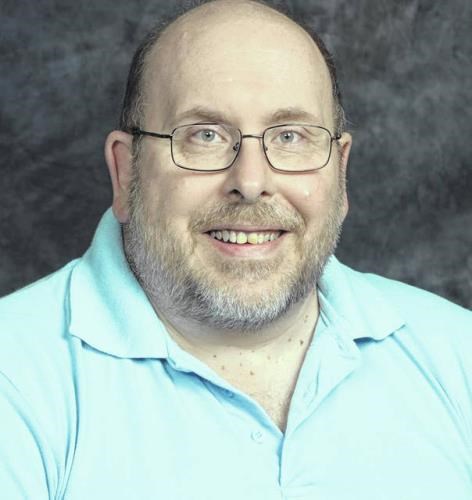 His early life was spent in Wilmington where he graduated from Wilmington High School with the class of 1978. He furthered his education at Wright State University earning a degree in music education.

He served a number of churches as an ordained Elder of the United Methodist Church in the West Ohio Annual Conference including Ebenezer, Blanchester/Edenton, Red Lion, Roundhead Charge, Hoytville, and Gibsonburg Faith.

His greatest joy was making music to praise the Lord; he especially enjoyed playing in and directing handbell choirs. He was a member of the Fellowship of United Methodists in Worship and the Arts, the American Guild of Organists, and the Handbell Association of America. He loved making music with his many friends.

He is survived by his loving wife, Susan, of 32 years; a brother, Tom (Brenda) of Wilmington, Ohio; a nephew, Marshall (Michelle) and grand-nephew, Colt, of Princeton, Kentucky. An uncle, Donald Rose, and a number of cousins also survive.

Mark was preceded in death by his parents; and a sister, Marilyn.

A memorial service celebrating the life of Mark R. Babb will be held Friday, June 18 at the Wilmington United Methodist Church in Wilmington. The Rev. George Reed, OSL will officiate.

The Hackman Family Funeral Homes of Sturgis is entrusted with the arrangements.

The obituary is also at www.hackmanfamilyfuneralhomes.com where we encourage relatives and friends to share memories and leave condolences for the family.

To plant trees in memory, please visit our Sympathy Store.
Published by News Journal from Jun. 15 to Jun. 16, 2021.
MEMORIAL EVENTS
No memorial events are currently scheduled.
To offer your sympathy during this difficult time, you can now have memorial trees planted in a National Forest in memory of your loved one.
MAKE A DONATION
MEMORIES & CONDOLENCES
1 Entry
Sr. Susan, I regret that I did not know of Br. Mark's death until now. I saw the notice on the FUMMWA email of those who had died in 2020. My condolences to you in the hope that is our in the resurrection of Christ Jesus who continually rises in the life of all that live. Br. Daniel
Br. Daniel Benedict
Other
July 2, 2021
Showing 1 - 1 of 1 results