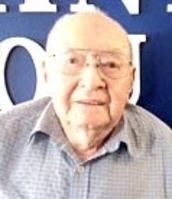 Published by York Daily Record on Jul. 25, 2016.
To plant trees in memory, please visit our Sympathy Store.
MEMORIAL EVENTS
Jul
27
Funeral service
10:00a.m.
St. Jacobs Lutheran Church
99 E. George St., York New Salem, PA
Funeral services provided by:
Leroy R Leber Funeral Home Inc
MAKE A DONATION
MEMORIES & CONDOLENCES
Sponsored by InYork.com.
3 Entries
Joan and family, so sorry to hear of the passing of your Father. You were so lucky to have him in your life for so long. He lived a very good and long life.
Shirley Frey
July 25, 2016
Remember him well a great christian and loving man friends with my parents for a lot of years prayers for all family and friends
Sandra (Miller)Oberdick
July 25, 2016
Dear Jean,and sisters and families . So sorry to hear Clyde passed , He was a fine guy ,and Well liked by my son Dick Adams and Clyde liked Dick since Dick was his son in law also. Clyde has lived a long life with all that he had gone through in the service.I know Clyde coming to Dick's memorial when he passed was a hi- light to the family . Because Dick considered Clyde a friend. I am sure the family has a lot of good memories of Clyde that will always be with them.
My sympathies to all.
Dot Adams
Dorothea Adams
July 25, 2016
Showing 1 - 3 of 3 results