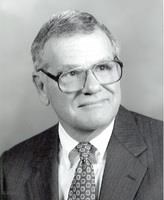 BORN
1923
DIED
2017
FUNERAL HOME
Etzweiler Funeral Home
1111 East Market Street
York, PA
Daniel G. Meckley III
March 22, 1923 - January 14, 2017
York
Daniel G. Meckley III passed away January 14, 2017, at Country Meadows of York,West. He was the husband of the late Eleanor Marie Oberdick Meckley. Dan was born March 22, 1923, in York, the son of the late Daniel G. Meckley Jr. and Florence Slenker Meckley.
Dan was a native of York and a product of the York public schools. He was graduated from William Penn Senior High School and was president of the Class of 1941. During World War II Dan served as an officer in the U.S. Navy. Dan attended Cornell University, MIT, and Penn State University. He was graduated from Penn State with a Bachelor of Science degree in Industrial Engineering. He was elected to the engineering honorary societies of Tau Beta Pi, Alpha Pi Mu, and Phi Kappa Phi.
From 1947 to 1958, Dan was employed by the predecessor companies of York International where he had various positions including Chief Industrial Engineer and manager of Quality Control. During this period, he wrote numerous technical papers on Quality Control and was president of both the local chapter of the American Society for Quality Control and the American Institute of Industrial Engineers. From 1958 to 1968, Dan was with the Tappan Company, a manufacturer of major appliances located in Mansfield, Ohio. He was Vice President of Engineering and Manufacturing and a member of the Board of Directors. When Dan returned to York in 1968, he became President of the Campbell Chain Company, and subsequently served as a group Vice president of Studebaker-Worthington, Inc. In 1977, Dan co-founded Flinchbaugh Engineering, Inc. and served on the Board of Directors until his retirement. From 1981 to 1987 he served as President of True Temper, Inc. Dan has served as a corporate director for number of companies including Delbar Products, Donsco, A. Duda & Sons, Hanover Foods, Shenult Industries, Progressive Typographers, Weldon Tool, and the York Bank and Trust Company.
Dan's civic activities included work with the YMCA, the York Hospital, the Chamber of Commerce, the Conservation Society, Rotary, Junior Achievement, the Manufacturer's Association, the Pennsylvania Society for Archaeology, the United Way, the Historical Society, and the Industrial Development Authority. Dan also served as a volunteer advisor to local government, civic, and charitable organizations. He also served on the MIT Education Council and the Penn State Industrial and Professional Council. He is a past president of the York County Agricultural and Industrial Museum and past Chairman and one of the founders of the regional Industrial Resource Center, MANTEC. He was awarded an Honorary Doctorate degree from York College and he was a recipient of the Lutheran Social Services Cornerstone Award. He was a life member of the York Fair, a member of the Country Club of York, and the Lafayette Club.
Dan was a lifelong avid fly fisherman and was a founding member of both Rambo Run and North Muddy. He enjoyed skiing and sailing throughout the world.
Dan is survived by two brothers, John Meckley and his wife, Pat of Newport News, VA, and Mike Meckley and his wife, Pat of Tampa, FL; a sister-in-law, Phyllis Oberdick of York; two sons, Daniel Meckley IV of Denver, CO, and David Meckley and his wife, Betsy of York; two grandchildren, Daniel Meckley V and his wife, Candace of York, and Allison Meckley of York; and two great-grandchildren, Whitney and Hannah Meckley; and a special friend, Nancy Newcomer of York.
Funeral services will be held Saturday, January 21, 2017 at 11 a.m. at First Presbyterian Church of York, 225 E. Market Street, York, with the Rev. Allison J. Beaulieu officiating. A visitation will be held Saturday from 9:30 to 11 a.m. in the Gathering Place of the church. Burial will be held in the Memorial Gardens of the church at a later date.
In lieu of flowers, memorial contributions may be made to the YMCA of York, 90 North Newberry Street, York, PA 17401 and the York County Community Foundation, 14 West Market Street, York, PA 17401.
Arrangements by the Etzweiler Funeral Homes and Cremation Service, 1111 E. Market St., York.
www.etzweilerfuneralhome.com

Published by York Daily Record on Jan. 17, 2017.
To plant trees in memory, please visit the Sympathy Store.
MEMORIAL EVENTS
Jan
21
Visitation
9:30a.m. - 11:00a.m.
Gathering Place of the church
PA
Jan
21
Funeral service
11:00a.m.
First Presbyterian Church of York
225 E. Market Street, York, PA
Funeral services provided by:
Etzweiler Funeral Home
MAKE A DONATION
MEMORIES & CONDOLENCES
Sponsored by InYork.com.
7 Entries
Very to hear of Dans passing . I can remember meeting him at Camp Minqua many years ago. He was such an amazing individual , supporting many activities and community. A real loss to York. Our thoughts and prayers to the family.
Charlie & Judi Snyder
January 20, 2017
What a fine man and family! I was fortunate to know the Meckley family during their years in Mansfield, Ohio. My parents, Hank & Barb Huber, were also members of the Mansfield Sailing Club. Their son David is a talented piano player who graciously agreed to accompany me on a trumpet solo for local competitions.
My sincere sympathies to the whole family.
Steve Huber
January 19, 2017
My sincere sympathy to Mr. Meckly's family. I first met Dan while I worked at The York Bank. After we both were retired we would talk while working out at the YMCA. He was very interested in the York community and a true gentleman. God bless his family.
Marlene Snyder
January 18, 2017
To the family of Dan and Ellie,
I know this is a sad day for all of you and my prayers and condolences are with you all! Dan was such a interesting smart man! Always loved talking with him when I took care of Ellie in the Alzheimers unit at Country Meadows! They often talked about their canoeing down the Susquehanna River collecting Indian artifacts! Reading Dan's obit just told me a whole lot more about the man you were lucky enough to call Dad and grandpa! What a full and interesting life he led! Sincerely,
Glenda Delle
Glenda Delle
January 18, 2017
My deepest sympathies to the entire Meckley family...Dan was like a grandfather to me...so smart and so loving...he was a living ambassador about York and I will cherish all the great stories he shared with me about his life. I'm really sad cause Dan made me a better person and it's not the same with him gone. There is so much I can share and in time I will. God bless you Dan...rest in heavenly peace as you discover all the joys heaven has for you. Thanks for caring about this Italian boy from Brooklyn NY...with utmost respect, prayers and sympathies...Perry Capurro and family....thanks to David for allowing me to work for and admire your great Dad.
Perry Capurro
January 17, 2017
Sorry for your loss, John. He seems to have had a very full life. I'll keep you and your family in my prayers.