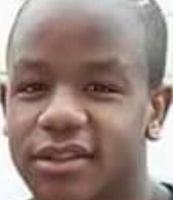 BORN
1998
DIED
2016
FUNERAL HOME
Boulding Mortuary Inc
471 Madison Ave
York, PA
Eugene D. Hillian, IV
August 30, 1998 - October 25, 2016
York
Eugene Davis Hillian, IV, 18, was born on August 30, 1998 to Patricia Green and Eugene Hillian, III.
Eugene passed away on Tuesday, October 25, 2016 at York Hospital.
He was a senior at William Penn Sr. High School and was a member of the Varsity Football Team; his favorite NFL team was the Atlanta Falcons and in addition to football Eugene liked Basketball.
Eugene leaves to mourn his loss, but cherish his memory his parents, Patricia and Eugene, both of York; his paternal grandmother, Barbara Hillian of Phila, Pa.; four brothers, Christopher Wynn, Darryl Simmons, Da'Quan Drummond and MiJiere Hillian, all of York; four sisters, Shontale Calloway, Brittany Calloway, NiJaia Hillian and Jaela Hillian, all of York; nieces, nephews, cousins and a host of other family members and friends. Eugene was preceded in death by his grandparents, Mary Hayes, Johnny Green and Eugene Hillian, II.
A viewing will be scheduled for Saturday, November 5, 2016 from 9 to 11 a.m. and a funeral service will follow at 11 a.m. at Jabez Ministries, 40 Jefferson Ave., York, PA 17404 with Pastor Adrian Boxley, officiating. Burial will be in Lebanon Cemetery, York. In lieu of flowers contributions can be made to Boulding Mortuary Inc. to help defray expenses.
Boulding Mortuary Inc.

Published by York Daily Record on Nov. 3, 2016.
To plant trees in memory, please visit the Sympathy Store.
MEMORIAL EVENTS
Nov
5
Viewing
9:00a.m. - 11:00a.m.
Jabez Ministries
40 Jefferson Ave., York, PA
Nov
5
Funeral service
11:00a.m.
Jabez Ministries
40 Jefferson Ave., York, PA
Funeral services provided by:
Boulding Mortuary Inc
MAKE A DONATION
MEMORIES & CONDOLENCES
Sponsored by InYork.com.
7 Entries
Gene&Pat... I'm so sorry that y'all have to go thru this no parent should have to bury they child. As time passes by it will get a little easier but u will never fully heal from this, this is a wound that will stay with u till you meet with him at the Gates.. An when u start to miss him just remember all the good times y'all shared all the little things he did to make u laugh that a make the day a little easier to get thru. . May God watch over y'all I'll keep y'all in my prayers luv y'all...
Tavis Scott
November 4, 2016
our deepest symphony goes out to you an your family! May he rest in peace amen!
Tony an barbara
Tony gillespie
November 4, 2016
tony gillespie
November 4, 2016
My condolences and prayers go out to the family, loved ones, and friends of the deceased.
Nina Gurreri
November 4, 2016
Donna Ferguson
November 3, 2016
Keeping the family in prayers
Mary Kendrick
November 3, 2016
SO VERY SORRY FOR YOUR LOST, MY PRAYERS ARE WITH THE FAMILY AT SCUH A VERY VERY DIFFICULT TIME.
Joann Kennedy & family
November 2, 2016
Showing 1 - 7 of 7 results