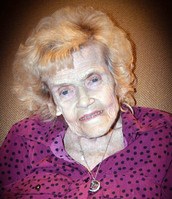 FUNERAL HOME
Etzweiler Funeral Home
1111 East Market Street
York, PA
Gloria M. Kauffman
York
Gloria M. "Mickey" Kauffman, 80, died at Country Meadows at Trolley Road on November 24, 2015. She was the wife of the late Thurman B. "Butch" Kauffman.
Born in York on July 13, 1935, she was the daughter of the late William Rubin and Romaine Elizabeth (Gotwalt) Tomlinson.
Gloria retired in 1974 as a teacher from Ferguson Elementary School in York.
She was a lifelong member of Fourth United Methodist Church, a past president of York County AARP, a Stephens Minister, volunteered with hearing and vision impaired individuals of all ages, was a band mom, a youth fellowship leader, a Hospice volunteer and an Alzheimer's volunteer. She was recognized by the staff and residents of Country Meadows as, "The Queen of Country Meadows".
She is survived by her daughter, Cindy Lundy and her husband William of York Haven; a granddaughter, Abigail Lundy; and a grandson, William Lundy, both of York Haven; two sisters, Belva Niedzielski of York and Mary Louise Shearer of Chambersburg; and two brothers, Arthur Tomlinson of Branson, Mo. and Robert Tomlinson of York.
A funeral service will be held at 11 a.m. Tuesday, December 1, 2015 at Fourth United Methodist Church, 1067 E. Market St., York, PA, with the Rev. Michael K. Fischer, chaplain at Country Meadows, officiating. Burial will be in Suburban Memorial Gardens. A viewing will be held from 10 to 11 a.m. Tuesday at the church.
In lieu of flowers, memorial contributions may be made to ForSight Vision Center, 1380 Spahn Ave., York, PA 17403.
Arrangements by the Etzweiler Funeral Homes and Cremation Service, 1111 East Market Street, York, PA 17403.
etzweilerfuneralhome.com
Published by York Daily Record on Nov. 27, 2015.
To plant trees in memory, please visit the Sympathy Store.
MEMORIAL EVENTS
To offer your sympathy during this difficult time, you can now have memorial trees planted in a National Forest in memory of your loved one.
Funeral services provided by:
Etzweiler Funeral Home
MAKE A DONATION
MEMORIES & CONDOLENCES
8 Entries
I love you Mother. Please be my guardian angel. I will miss you every day. I'm happy that you're with Daddy. Your funeral was beautiful. And so were you!
Cindy Lundy
December 1, 2015
My dearest Mickey: You will be sadly missed by so many especially me. Love you and R.I.P. my beautiful angel.
Deb Robinson
December 1, 2015
Mickey touched many lives and strengthened my faith. I'm sure she is enjoying her rewards in Heaven.
Love, Sharon Gochenauer
Sharon Gochenauer
November 30, 2015
I will miss your cute little voice and the sound of your laugh. Your personality and spunk gave me life. And although you thought my name was "Oh Leo," I didn't mind one bit. You were the most grateful and loving woman I think I've ever met. I will miss bringing you maple donuts now and again. Eat one up in heaven for me. Love always.
Aleah Williams
November 29, 2015
To Cindy Bill Abby and Billy, My thoughts and prayers are with you all. She was a very kind soul . Cherish all of your memories with her. I love you all wish I could be there to hug you guys. I love you all
Jody Riley
November 29, 2015
Keeping you in my thoughts and prayers!
Kevin Willson
November 28, 2015
Cindy and Family...We will miss the joy, laughter, beauty and grace that was Mickey. What a wonderful privilege to have been blessed by knowing her. Our lives are richer because she touched them. May God hold you so close and keep all the wonderful memories with you forever. Jenny Owens, Country Meadows
Jennifer Owens
November 28, 2015
MY amazing grandmother, I will miss you every single day. Thank you for everything you've done for me! I love you so much, and I hope you're having fun with Pappy in Heaven!!
Abby Lundy
November 28, 2015
Showing 1 - 8 of 8 results