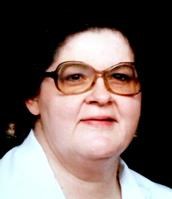 BORN
1940
DIED
2016
FUNERAL HOME
Leroy R Leber Funeral Home Inc
2290 School St
York, PA
Nancy L. Buchanan
Dover
Nancy L. (Robinson) Buchanan, 75, passed away Sunday, May 8, 2016, at Manor Care North, York. She was the wife of the late Robert E. Buchanan.
Mrs. Buchanan was born in York on December 23, 1940, daughter of the late Gerald and Katherine (Hankey) Robinson.
She was employed as a sewer by York Tent and Awning, York, from which she retired.
Survivors include three sons, Robert Buchanan and his wife, Victoria, Jeffrey Buchanan and David Buchanan and his companion, Charlotte Lamb; five grandchildren; five great-grandchildren; two brothers, Charles Robinson and his wife, Kathy, and Gerald Robinson, Jr. and his wife, Brenda; and two sisters, Barbara Walb and her husband, Gary and Deborah Hensdill and her husband, Ernest.
There will be a visitation Thursday, May 12, 2016 from 6:30 to 7 p.m. immediately followed by a memorial service at the LeRoy R. Leber Funeral Home, Inc., 2290 School St., York (Shiloh). Final resting place will be private at the convenience of the family in Mount Rose Cemetery, York.
www.leroyleberfuneralhome.com
Published by York Daily Record from May 10 to May 11, 2016.
To plant trees in memory, please visit our Sympathy Store.
MEMORIAL EVENTS
May
12
Visitation
6:30p.m. - 7:00p.m.
Leroy R Leber Funeral Home Inc
2290 School St, York, PA
May
12
Memorial service
7:00p.m.
Leroy R Leber Funeral Home Inc
2290 School St, York, PA
Funeral services provided by:
Leroy R Leber Funeral Home Inc
MAKE A DONATION
MEMORIES & CONDOLENCES
Sponsored by InYork.com.
8 Entries
Our condolences to the entire family. Nancy was a great co-worker and friend. We will miss her.
Joe Musti
May 12, 2016
Sorry I can't be there. She is in a much better place!
Love,
Kim (Hunter)
Kimberly Hunter
May 12, 2016
Bob, Jeff, and Dave,
Thinking of you and your family in this time of sorrow.
Kathy Dowling (Swemley)
May 11, 2016
Our condolences to the Buchanans, Nancy I will never forget all the times together. I will always miss you. RIP
CHRIS & FAMILEY OVERMILLER
May 11, 2016
Chris and familey Overmiller
May 11, 2016
Our condolences to Bob, Jeff, Dave and their families. Your mother had the biggest heart of gold.
Nancy, ( who is looking down upon us) I will always remember when you took the heat for me. I am glad you will reside with God now, in a safe and peaceful place.