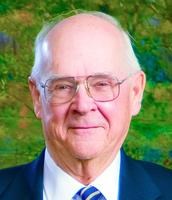 FUNERAL HOME
Clyde W Kraft Funeral Homes - Columbia
519 Walnut St
Columbia, PA
Philip H. Glatfelter
Columbia
Philip H. Glatfelter, II, 86, passed away peacefully on Saturday, October 1, 2016 following an illness of three weeks. He was the husband of Bernadette Hilbert Glatfelter who preceded him in death on July 26, 2015. He and Bernadette were married for 62 years. Born in Columbia, he was a son of the late David K. and Helen Hughes Glatfelter.
Mr. Glatfelter began his business career after graduating from Lancaster Catholic High School in 1948 with the Columbia Candy Company that was owned and operated by his late father, David K. Glatfelter. He was inducted into the U.S. Army in 1951 and saw action in the Korean conflict and was awarded the Bronze Star for meritorious service. Discharged in 1953 he began his career in banking as a teller with the Columbia Trust Company, a bank that his late grandfather, David L. Glatfelter, was one of its founders and President. His late uncle, Philip H. Glatfelter, became President after serving in World War II. After 36 years in banking he retired from Meridian Bank (now Wells Fargo Bank) as a board member and Vice President in 1989. He continued in banking having served on various bank boards and was a member of the Union Community Bank board at the time of his death.
He served as Director and Chairman of the Board of Directors of Donegal Mutual Insurance Company. He was also a member of the Board of Directors of Donegal Group, Inc., and all of its subsidiaries and served as past Chairman of the Board of Directors of Donegal Group, Inc. He was a Member of the Board of Directors and Vice President of the Columbia Water Company and was currently serving as a Board Member of the Conestoga Title Insurance Company.
He was President of Columbia Catholic Housing for the Elderly and the sponsor of Trinity House and St. Peter Apartments. He was President of the Columbia Healthcare Foundation. He served on the boards of St. Anne's Retirement Community, Columbia Hospital, Lancaster General Hospital and St. Joseph Hospital. Other public services included Vice Chairman of the Lancaster County Housing and Redevelopment Authority and Trustee of the Lt. Richard Glatfelter Memorial Field Foundation. For his community service he was recognized by the Boys and Girls Club with the Man of the Year Award, the Lancaster New Era Red Rose Award and the Susquehanna Sports Hall of Fame Jimmy Sheckard Award. He, his wife and seven children were recognized by the Pennsylvania Knights of Columbus designating them as family of the year.
He enjoyed genealogy and family history and served 41 years as Vice President of the Casper Glattfelder Association of America. He made several trips to his ancestral town in Glattfelden, Switzerland. He enjoyed boating, fishing and water activities on the Susquehanna River and the bays with his family and friends. Also, the many trips to Ocean City, NJ, Disney World and foreign travels.
He was an active member of Holy Trinity Catholic Church, Columbia and Our Lady of the Angels Catholic School, formerly Holy Trinity Catholic School, where he graduated. He chaired several improvement drives including a new rectory, school addition and computer lab. He was a graduate of Lancaster Catholic High School Class of 1948. He was a member of several fraternal groups including Knights of Columbus Council #2294 where he served as past Grand Knight and he was a member of the Santa Maria General Assembly 4th Degree. He was a member of the Catholic War Veterans Post #1306, that his father helped to organize, Columbia Veterans of Foreign Wars Post #2435, Columbia Lions Club, Columbia Middletown Elks Lodge #1074 and a Life Member of the Columbia Canoe Club.
Surviving are three sons, Philip H., III, married to Anne Whitman Glatfelter , TX, Joseph C. married to Nancy Matthews Glatfelter, Langhorne, PA and Carl E. married to Lisa Hackash Glatfelter, Lancaster; and three daughters, Anne Marie Hopkins, FL; Christine L. married to John Musser, Columbia and Elaine C. Carrigan, Lititz; 14 grandchildren; and four great-grandchildren; a sister, Kathleen Benitz, CA. He was preceded in death by a son, Richard J.; four brothers, David, John, Joseph and Thomas; three sisters, Helen Weaver, Margaret Misel and Patricia Martin.
A Mass of Christian burial will be held from Holy Trinity Catholic Church, 4th & Cherry Streets, Columbia, on Saturday, October 8, 2016 at 10 a.m. with the Rev. Fr. Stephen Kelley as Celebrant. Final Commendation and Farewell will be in Holy Trinity Catholic Cemetery. A viewing will be held on Saturday at Holy Trinity Catholic Church from 9 to 10 a.m.
The family request that flowers be omitted. Memorial Contributions in Mr. Glatfelter's memory may be made to Holy Trinity Catholic Church, 409 Cherry Street, Columbia, PA 17512 or Water Street Rescue Mission, 210 S. Prince Street, Lancaster, PA, 17603.
Arrangements by the Clyde W. Kraft Funeral Home, Inc., Columbia/Landisville 684-2370/898-2440
cwkraftfh.com