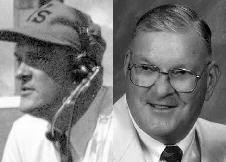 FUNERAL HOME
John W. Keffer Funeral Home, Inc.
2114 West Market Street
York, PA
YORK Raymond W. Schmidt, 82, died peacefully at Barley Autumn House East on Sunday, June 28, 2015 after a courageous battle with kidney disease. He was the husband of Suzanne Wolpert Schmidt for 59 years. He was born in Harrisburg on July 20, 1932. He was the son of the late Raymond C. Schmidt and Margaret (Daylor) Schmidt. Ray was a 1950 graduate of Lancaster Catholic High School. After receiving a Bachelor of Science Degree from Millersville University he continued on and completed a Master's Degree of Education from Temple University. Raymond began his teaching career at Cumberland Valley High School in 1955 where he also coached football and basketball. He joined the teaching staff of York Suburban High School on its opening day in 1958 as a math teacher. During his 35 year tenor he also taught Driver's Education and coached football and basketball. One of his earliest Junior High teams went on to have an undefeated season. Members of this team have remained in touch to this day. Ray had a genuine concern for all students and athletes that through the years would reach out to thank him. Raymond was a member of St. Mary's Church since 1958 where he served as a lecture and Eucharistic Minister. He belonged to the Knights of St. Paul, the Bereavement Committee, and the Golden Nuggets. Raymond was a dedicated volunteer of St. Mary's Thrift Shop, Salvation Army, York County Blind Center and the American Cancer Society. He was a faithful member and past president of Kreutz Creek Valley Lion's Club where he was awarded the Melvin Jones Fellowship Award. For 23 years he served as Director of the York Educational Federal Credit Union. Among Ray's favorite hobbies were golf, watching game shows, and routing for Notre Dame Football. For years Ray enjoyed playing the part of Santa for friends and family and at many functions throughout York. Following in his father's footsteps, Raymond continued his passion for baking cookies and loved sharing them with family and friends. During his retired years he became a lunchtime regular at Marino's Pizza and Pasta House with his wife, Sue. For the past 31 years the joy of Ray and his wife's lives were their grandchildren. From grade school through college they could be found on the sidelines cheering on Emily and Mitchell. In addition to his wife, Raymond is survived by his daughter, Mary Beth Steelman and her husband, Joseph; and grandchildren, Emily Steelman Freeborn and husband, Maxwell, of Manassas, Va. and Mitchell Steelman of Philadelphia; a sister, IHM Sister Mary Elizabeth Schmidt of Philadelphia; and many nieces, nephews, and cousins. He was preceded in death by his sister, Joann Reineberg and brother-in-law, Donald Reineberg. A viewing will be held on Wednesday July 1, 2015 from 6 to 8:30 p.m., rosary to follow at John W. Keffer Funeral Home and Crematory, Inc. 2114 W. Market St., York. A Mass of Christian Burial will be celebrated at St. Mary's Catholic Church, 309 S. George St., York, at 10 a.m. following a viewing beginning at 9 a.m. on Thursday July 2, 2015. Burial immediately following at Holy Saviour Cemetery. Donations may be made in Raymond's name to Heartland Hospice, 4317 Concord Road, Ste C, York 17406 and St. Mary's Catholic Church, 309 South George Street, York, PA 17401. The family of Raymond would like to send a special thank you Dr. Michael Wilson, nurse Morgan Bentivegna, and the staff of Stoneybrook Family Medicine for many years of excellent medical care and concern.

KefferFH.com
Published by York Daily Record on Jun. 30, 2015.
To plant trees in memory, please visit the Sympathy Store.
MEMORIAL EVENTS
To offer your sympathy during this difficult time, you can now have memorial trees planted in a National Forest in memory of your loved one.
Funeral services provided by:
John W. Keffer Funeral Home, Inc.
MAKE A DONATION
MEMORIES & CONDOLENCES
29 Entries
We miss you each and every day Raymond. We still reminisce on all the "Ray" things you left for us! Love you!
Joe Steelman
June 24, 2021
Our good friend and coach will always be fondly remembered. With love from the YSH class of 1966!

fred bergdoll
Student
June 24, 2020
rest in peace coach Ray we all enjoyed playing for you 1966 JV Basketball YSHS one loss It was a great season
Fred Shultz
August 25, 2015
Dear Sue, Mary Beth, Joe, Emily, and Mitch
Our deepest sympathies for your loss of this truly wonderful husband, father, grandfather, teacher, and coach. He was a fantastic role model to everyone. This is truly an example of a life well lived. He is in a better place now and we all miss him very much.
Tom And Gina Ortenzio
July 9, 2015
Rest in peace Coach.
Kenneth Swezey
July 7, 2015
I must attribute my "good" driving record to the fact that "Uncle Raymond" taught me to drive many, many years ago and even took me to the State Police Barracks to take my test. Thank you for that and uncountable memories since then. See you later, just around the corner. Love Josie
Josie Rice
July 4, 2015
Coach Schmidt--thanks for being a great coach and an excellent teacher but most importantly thanks for being a wonderful role model. Your spirit lives on within us Coach! Love and God Bless.
Tony Winter
July 2, 2015
Coach: I never properly thanked you for all you did for me in my time at York Suburban. I hope someday to right that wrong. Until then may God hold you in the palm of his hands...
Marc Troiani
July 1, 2015
Mr schmidt will always be the best math teacher ever! Prayers to the family ive gotten to know as this truely saddens me
Missi Snell
July 1, 2015
Marinos will never be the same. Rest easy Raymond. I hope you are dancing up in heaven like you always danced by the waitress station. <3
Danielle Staggers
July 1, 2015
Patient wonderful man
Bill Anderson
July 1, 2015
My deepest sympathy to Ray's loved ones. I have fond memories of working with him at York Suburban. He always had a smile on his face when he came in the office.
Sue (Hawk) Wineholt
July 1, 2015
A great man. A great coach. "A team that won't be beat, can't be beat."
Dave Gotwald
July 1, 2015 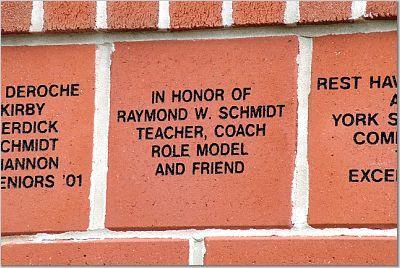 Coach Schmidt was just a great man. He taught many people many things, but I think I learned more just watching the way he lived. You will be missed by many, coach.
Allen Holter
July 1, 2015
It was a blessing to take Communion to Raymond and meet Sue at the Autumn House.Each of us on the Caring Ministry from St.Joe's will miss our Sunday vists, and will say a prayer when we pass D5. A true servant of Our Lord's.
Dale Ostrom
July 1, 2015
Best math teacher I have ever had!!! You were a true blessing to the teaching field. God Bless.
Debra Mitzel
June 30, 2015
A gentleman for all to look up to! Well respected. A teacher who was caring. Will be missed by many. Prayers for the entire Schmidt family.
Mark Lipsitz
June 30, 2015
Both my husband and I had Mr. Schmidt as a teacher at YSH...What a wonderful teacher and a wonderful man. Will always have wonderful memories of him. His positive and warm, friendly energy now warms us all. Sweet journey, Mr. Schmidt ! Cathy and Dick Estlack
Catherine Estlack
June 30, 2015
Mr.Schmidt was a great teacher and we were blessed to have him not only schooling us in math but getting us ready for life!! Sending prayers to his family durning this timetime.
angie berkheimer
June 30, 2015
You were always my favorite math teacher. One of your famous quotes that has stuck with me thru the years was, "Pay yourself first". God Bless
Mitzel Debra
June 30, 2015
Coach Schmidt was a terrific coach, mentor and example for all who played football and basketball for him.
Steve Reber
June 30, 2015
georgia blauser
June 30, 2015
he was the best teacher i ever had great guy so sorry for the loss
georgia blauser
June 30, 2015
Coach .. You were not only a great husband, father, grandfather, teacher and coach, but also an awesome friend that was always there to help and support. You will be missed by so many. God Bless.
Rod Albright
June 30, 2015
We both thought Mr. Schmidt was one of the best and nicest teachers at York Suburban. He was a role model to us and all of his pupils.
Gary and Sue Goldstein
June 30, 2015
"Coach Schmidt" was a wonderful man and mentor. He taught us all the importance of hard work, compassion and accountability.
Fred Bergdoll
June 30, 2015
Uncle Raymond has now joined the choir of angels looking over us. You are in my thoughts and prayers.
Kathleen (Trauger) Whittaker
June 30, 2015
Mr. Schmidt was the kindset teacher I ever had at York Suburban.He always had a smile on his face and was a great guy.God Bless You.
Orvin E. Reidel II
June 30, 2015
Dear Sue, MB, Joe, Emily and Mitch:
No one needs to tell you what a good man Raymond was. Generous, kind, patient, helpful are just a few words to describe him and they are traits he passed on to his daughter. Inviting us to his "beach week" for many years, being my "limo" driver when I could't drive, always being at the grandchildren events no matter what they were are things I hope to emulate . Hoping for birdies for him on his next round of golf. Best, Pat and Chris
Pat Marsala
June 30, 2015
Showing 1 - 29 of 29 results