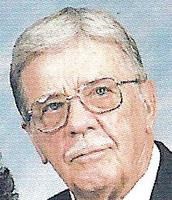 BORN
1923
DIED
2016
FUNERAL HOME
Leroy R Leber Funeral Home Inc
2290 School St
York, PA
Robert B. Reisinger, Sr.
York
Robert B. "Bob" Reisinger, Sr., 93, passed away Sunday, August 14, 2016, at SpiriTrust Kelly Manor, York. He was the husband of Jacqueline R. "Jackie" (Kinard) Reisinger, with whom he celebrated their 71st wedding anniversary on March 3, 2016.
Mr. Reisinger was born in York July 19, 1923, son of the late Elmer M. and Verde J. (Gladfelter) Reisinger.
Bob was a 1941 graduate of York High. He was a Tool and Dye Design Engineer for the former GTE Sylvania, where he retired after 33 years of service in 1986. His passion was golfing, and did so until he was in his 90s.
In addition to his wife, he is survived by four children, Carole S. Reisinger and her husband, Edward of Wrightsville, Sandra L. Hinkle and her husband, Donald of York, Robert B. Reisinger, Jr., and his wife, Randi of Glenville, and Cathy R. Keith of Tennessee; seven grandchildren, Edward L. Reisinger III, Laura L. Scott, Steven E. Hinkle, Susan E. Richeson, Kaitlin R. Collignon, Nicholas R. and Falon E. Keith; and 12 great-grandchildren. He was preceded in death by four brothers.
Bob's services will be private at the convenience of the family.
In lieu of any flowers, memorial contributions may be made in Bob's name to Trinity United Church of Christ, 200 E. Market St., Hellam, PA 17406.
leroyleberfuneralhome.com
Published by York Daily Record on Aug. 18, 2016.
To plant trees in memory, please visit the Sympathy Store.
MEMORIAL EVENTS
To offer your sympathy during this difficult time, you can now have memorial trees planted in a National Forest in memory of your loved one.
Funeral services provided by:
Leroy R Leber Funeral Home Inc
MAKE A DONATION
MEMORIES & CONDOLENCES
Sponsored by InYork.com.
0 Entries
Be the first to post a memory or condolences.