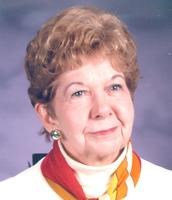 BORN
1925
DIED
2017
FUNERAL HOME
Heffner Funeral Chapel & Crematory Inc
1551 Kenneth Rd
York, PA
Ruth E. Winter
YORK
Ruth Winter passed on Thursday July 20, 2017.
Ruth was born in 1925 in North York and was the daughter of the late Walter H March, Sr. and Amy I (Bupp) March.
She was a graduate of North York High School (Central). In her younger years, she was employed by several local businesses. She retired in 2001 after 43 years of service to York Country Day School, an affiliate of York College of Pennsylvania. She served as the School Secretary and Administrative Assistant to the Head Master.
Ruth was a Life Member and Past Matron of the former Starlight Chapter No. 508, Order of the Eastern Star and was currently a member of the White Rose Chapter No. 36, O.E.S.
During her retirement years, Ruth enjoyed socializing with dear and loving friends. She enjoyed Broadway Shows, theater, classic movies, and staying aware of current events.
Survivors include loving nieces, nephews, great nieces and nephews, and cousins. Nephews include Michael March and his wife, Deborah, and William March and his wife, Mary. Nieces include Ladonna (March) Zeller and her husband, Kenneth, and Gail Farcht. Great Nephews include Michael March II, Christopher March, Richard March III and Matthew March and his wife, Jennifer. Ruth is also survived by her cousin, Dottie (Greenholt) Moquin and her husband, Ross. Ruth was preceded in death by her brothers, Richard March and his wife, Ruth (Winter) March and Walter March, Jr. and his wife, Violet (Lehman) March. Preceded in death was nephew, Richard March II, survived by his wife, Phyllis.
Ruth was a loving and supportive person to everyone she was in contact with. Her smile will be missed.
There will be a Celebration of Life Service at Heffner Funeral Chapel & Crematory, 1551 Kenneth Road, York, Monday, July 31 at 6 p.m., with the Reverend William C. Sowers officiating. Visitation will be from 5:30-6 p.m. prior to the service. Burial will be private in Prospect Hill Cemetery.
Memorial contributions may be made to The Wounded Warrior Project.
Send Condolences at HeffnerCare.com
Published by York Daily Record on Jul. 25, 2017.
To plant trees in memory, please visit the Sympathy Store.
MEMORIAL EVENTS
Jul
31
Visitation
5:30p.m. - 6:00p.m.
Heffner Funeral Chapel & Crematory Inc
1551 Kenneth Rd, York, PA
Jul
31
Celebration of Life
6:00p.m.
Heffner Funeral Chapel & Crematory Inc
1551 Kenneth Rd, York, PA
Funeral services provided by:
Heffner Funeral Chapel & Crematory Inc
MAKE A DONATION
MEMORIES & CONDOLENCES
Sponsored by InYork.com.
5 Entries
The brightest light in the universe. Ruth was the kindest person I've ever met. Her guidance and friendship is one my most treasured gifts. Rest in peace, my dearest friend.
Gerry Regensburg
December 15, 2018
Ruth was a friend to everyone at YCDS. I missed her every day since she retired. There is a whole in
the universe with Ruth gone. There are some people you meet who changed your life and made
you a better person, she was that for me.
Cathy Gill
July 31, 2017
Ruth was my husband Brian's cousin. She was a grand lady, who was beloved by all her family, especially her nephews, their wives, and sons. She will be greatly missed.
Lucy March
July 29, 2017
I went to YCDS for all of my school years. From first grade until graduation one thing remained constant, Mrs Winter. She kept things running efficiently and dealt with the kids with kindness. She touched a lot of lives.
LIz Maudlin
July 26, 2017
Just found out this sad news from Mary!! I had the opportunity to have a long talk with Ruth not long ago. She was alert and so much fun to talk to and reminisce about old days. She will be missed by so many that had the good fortune to know her!!!1 YCDS and all that knew her stand in mourning!!! Pete Brougher/
July 26, 2017
Showing 1 - 5 of 5 results