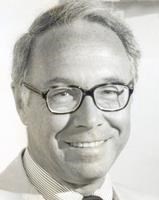 FUNERAL HOME
Diehl Funeral Home & Cremation Center Inc
87 S Main St
Mount Wolf, PA
William Trout Wolf
Mt. Wolf
William Trout Wolf died on September 9, 2016, at 4:15 p.m. in his home in Mt. Wolf. He was 95 years old. He was the son of the late Evelyn Trout Wolf and the late Earle L. Wolf and the husband of Cornelia Westerman Wolf.
Mr. Wolf was a devoted husband and father, business executive, civic leader, generous philanthropist, and a life-long fan of the Mt. Wolf Wolves baseball team.
Mr. Wolf was born and raised in Mount Wolf. The town is named after his great-grandfather, George Wolf who, in 1854, moved his lumber and coal business to a new railroad line running between Harrisburg and York. Members of the Wolf family continue to reside in Mt. Wolf.
In 1945, Mr. Wolf returned to Mount Wolf after graduating from Dartmouth College and serving in the U. S. Army during WW II. He then joined the family business, becoming the fifth generation to run the Wolf Organization. Bill and his brother-in-law, close friend, and business partner, John Zimmerman, led the way in significantly expanding and modernizing the family business.
Mr. Wolf was the chairman and president of the Wolf Organization. He was one of the founders, president, and later chairman of York Federal Savings and Loan Association, Chairman of the Board of Lumbermen's Merchandising Corporation (Wayne, PA), and a member of the Board of Directors of GTE, York Container Corporation, and Merchants and Business Men's Mutual Insurance Company.
Mr. Wolf was actively engaged in the civic life of the community. He was the Chairman of the Board of what later became the United Way of York County, Chair of the Penn State-York Board of Trustees, Chair of the York Heart Association, and on the board of directors of the York Hospital, Memorial Hospital, and the Crispus Attucks Association. He was one of the founders of Better York, Inc. and, along with his wife, was a leader in building the York County Community Foundation. He was also president of the Rotary Club of York, trustee at the Otterbein EUB Church in Mt. Wolf and was a board member of the York Area Chamber of Commerce, Mt. Wolf Sewer Authority, Mt. Wolf Parks Association, and Northeastern School Board.
He is survived by his wife, Cornelia; his four children, Thomas and his wife, Frances, Andrew and his wife, Elizabeth, Cornelia and her husband, Samuel Wilson, and Henry and his wife, Joan; his eight grandchildren, Michael Smith and his wife, Giovanna, Sarah Wolf, Katherine Coffin and her husband, Jamie, Emily Wolf, Andrew Wolf, Cornelia Wilson, Marshall Wilson, and Isaiah Wolf; and two great-grandchildren. He is also survived by his brother-in-law, John D. Zimmerman; and his brother-in-law, John Henry Westerman and his wife, Rosemarie. He was preceded in death by his sister, Katherine Wolf Zimmerman.
A private service will be held. Arrangements have been entrusted to the Diehl Funeral Home and Cremation Center of Mount Wolf.
Donations in lieu of flowers may be sent to the Fund for York County at the York County Community Foundation or to a favorite charity.

Published by York Daily Record on Sep. 11, 2016.
To plant trees in memory, please visit the Sympathy Store.
MEMORIAL EVENTS
To offer your sympathy during this difficult time, you can now have memorial trees planted in a National Forest in memory of your loved one.
Funeral services provided by:
Diehl Funeral Home & Cremation Center Inc
MAKE A DONATION
Please consider a donation as requested by the family.
MEMORIES & CONDOLENCES
Sponsored by InYork.com.
9 Entries
Dear Cornelia,I am Patty Young Smith an old old friend from childhood days. Just touching base with old old memories. My condolences, with the fact you lost your husband, as did I.Kindly,Patricia Young Smith(from Columbia, Pa.)
Annetta Cracraft
January 6, 2017
So sorry to hear of Bill's passing, even though its been a long time between contacts, he in my mind , was one of the best and will certainly be missed. You have my deepest sympathy and heart felt condolences and must know that this Old World is a better place for him passing our way....
Pete Bowers
October 24, 2016
There are many fond memories of William and his loving wife, Cornelia, and family. The ties between the Wolf's and my family go back decades. Both Trout and my late father, Schmucker served on the board of GTE, were active in the Y's J's and the York Interstate Fair as life members, and served together on numerous boards in the community.
William was a self-effacing gentleman born with insight, a wry sense of humor, and an incredible sense of community.
Perhaps my fondest memory is of the two Williams, huddled together at a dinner party looking like Stadler and Waldorf chortling over something. That was priceless!
Christopher Eisenhart
September 12, 2016
It can be so hard to face the first year without your loved one, but the love of family and friends can carry you through.
Northeastern Area Emergency Management
September 12, 2016
To the Wolf families,

Our death is not an end if we can live on in our children and the younger generation. For rhey are us, our bodies are only wilted leaves on the tree of life.