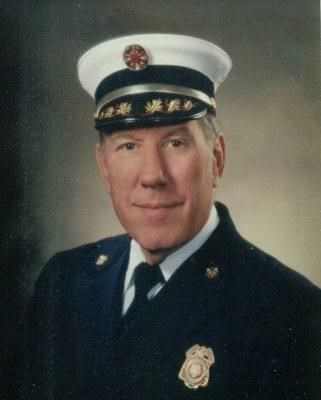 Born November 17, 1931 in York, a son of the late Edward W. and Cora M. (Hall) Kroll, he was retired as Fire Chief of the City of York, serving the department for 39 years. He was a member of Christ Lutheran Church; West York VFW Post 8951; and the YMCA, where he had served on the Board of Directors and as Chairman of its membership drive in 1983 and 1984. He had also been a volunteer for Make-A-Wish Foundation, and an Advisor for the Boy Scouts of America Fire and Emergency Services Explorer Post. An avid racquetball player at Sawmill Racquet Club and LA Fitness, he was a former State Champion in Open Class. He also served in the US Navy on the Battleship Iowa during the Korean War.

Mr. Kroll is survived by his long time companion, Shirley A. King, of York; a son, George E. Kroll, II, and his wife Linda, of Monument, Colorado; two grandsons, Roberto and Antonio Barranca; and his son-in-law, German Barranca. He was also preceded in death by his daughter, Christine D. Barranca; and a sister, Mildred Markey.

A public viewing will be held from noon until 2:00 PM Tuesday, September 17, 2019, at Kuhner Associates Funeral Directors, Inc., 863 South George Street, York. Private funeral services will be held at 2:00 PM Wednesday with his Pastor, The Rev. Dr. Alan J. Watt, officiating. Burial will be in Mount Rose Cemetery, with flag presentation by the York County Veterans Honor Guard.

Condolences and you are in the thoughts of many.
Susan Potts O'Keefe.
Susan O'Keefe
September 23, 2019
Mr. Kroll was my father's best friend for over 80 years. Like my father, Mr. Kroll had a kind heart and a gentle soul. He loved his family dearly and was extremely proud of his grandsons, Roberto and Antonio. Mr. Kroll will forever be in our hearts. Prayers of peace and comfort to his family.
Jennifer Garrett Pauley
September 17, 2019
So sorry for your loss. George was a good man. Loved spending time with him at baseball games reminiscing about the past. May you always treasure the memories of him and know that he is at peace.
Randy, Cathy (Deardorff) & Michael Livingston
September 17, 2019
George you were a very good Deputy and friend to my father, Bob Little, He liked you and respected you as a person and a fire officer. I am very sorry to see of your passing but I am sure that Dad will be one of the first people there to greet and welcome you home. My condolences to the rest of the family.
Willa Little-Gratz
September 16, 2019
Chief you were a very good man to serve with my father Bob Little, mHe liked and respected you a great deal. Very sorry to hear of your passing but I'm sure that Dad will be there to greet you and welcome you home. My condolences to the rest of your family
Willa Little-Gratz
September 16, 2019
Chief and my father went on the job together in the YFD on 20 April 1956. Many fond memories with him and the Kroll family over the years. Over at the house on Springettsbury Avenue, Hunting at Chief Landis's cabin in Caledonia, Saturday mornings at the Fire Museum. Most memorable was when he, my father and Chief Roth went on the USS Theodore Roosevelt's tiger cruise back in the 90's when I was in the Navy. My thoughts and prayers are with the Kroll family. What a great man. Rest in peace Chief.
John Orendorff
September 16, 2019
Rest easy Chief. It was an honor to know you.
Kay Carman
September 15, 2019
George was a very kind, and compassionate person...and he was funny too!! I remember his stories from when he taught the state fire program that I was privileged to attend. One was about all these cows blocking the roads, and how the FFs had to get them off the road before they could go to the fire. Another story, and I'll never forget this one, is that George liked to exercise at the YM every morning. One day he was in the office and there was a fire that he was responding to. George goes out the right door of the admin office, goes to jump in his car, and discovered it wasn't there. He had left it at the YM and walked to the office that day! Most of us never forgot that day, and he was always a good sport about it.

He was a good fire chief who was always teaching without calling someone out. I loved working under your guidance, George.

May the Lord wrap His loving arms around all who loved you. You touched many, and God is now rewarding you.
Peggy Ann Roche
September 15, 2019
Showing 1 - 8 of 8 results