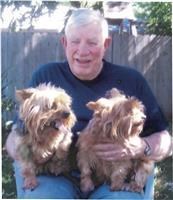 As a young man, Chuck, as he was affectionately known, attended Geneva Public Schools, graduating with the class of 1950. He furthered his education by attending Hastings College and the University of Nebraska-Lincoln. He enlisted in the US Navy, serving in the Korean War and later resumed his service to his country by serving in the Vietnam Conflict as well. After his first discharge, Chuck was united in marriage to Barbra "Jean" Harrington on Oct. 4, 1952 in Lincoln. To this union three sons were born, Christopher, Mikel and Daniel. Early on, Charles and his wife were no stranger to the motel and hotel business. They managed motels at the Goldenrod Motel in Geneva, later in Sanger, Texas, Holbrook, Ariz. and Joplin, Mo. for many years. Chuck was an active businessman and entrepreneur, operating the Eat-N-Tote, The Lamplighter Café and many other enterprises in Geneva. Later, Chuck, Jean and his brothers also operated their rental property business in Geneva for some time, including purchasing the small historic 1912 building and renovating it into the Geneva Hotel in 2010.