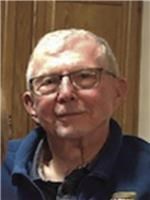 A Memorial Service will be held at 10 a.m. on Saturday, Oct. 31 at the Higby-McQuiston Chapel, located at 1404 L Street in Aurora. Graveside service at the Aurora Cemetery to follow. Lunch will be served at the Bremer Community Center, 1604 L St. in Aurora. No Visitation. Current CDC guidelines will be followed. Face masks are recommended. In lieu of flowers, the family requests memorials may be designated for either Lester S. Harter Post #42 Aurora American Legion, P O Box 204, Aurora, NE 68818 or York Adopt A-Pet, 1511 N Platte Ave, York, NE 68467. Condolences may be e-mailed to the family through the mortuary website at www.higbymortuary.com.

Ron's early life was spent on the farm, attending country school. Ron graduated from Aurora High School in 1952. Following a short stint in junior college in California, Ron settled into college life at Hastings College. His academic career was put on hold when he joined the U. S. Army, serving for three years, 18 months of those in Korea.

Following his honorary discharge, Ron continued his education at Hastings College. He and Leslie Wintermute had known each other before Ron served in Korea, but upon his return to Hastings, the two began dating. Ronald and Leslie were married Nov. 23, 1957.

The newlyweds moved to Ames, Iowa, where Ron enrolled in the engineering school at Iowa State College. In 1959, however, a family illness necessitated the two move back to Nebraska. Ron finished his degrees at Hastings College, majoring in Math and Physics, graduating in 1961. Their first child, Lee Ann, was born in 1960 in Hastings.

Ron and Les moved to Trumbull where they both taught high school and sponsored school activities. During this time Ron coached a state volleyball championship team.

The couple's second child, John Jeffrey, was born in 1965. The school year of 1965 -1966 found the family in Cozad, where Ron taught and Leslie substitute taught.

Only one school year was spent in Cozad as Ron had an opportunity to move to Aurora and work for Wortman Ford. A math position opened at Aurora Junior High School because of illness and Ron was approached about the job. He accepted, and the remainder of his teaching career was spent at Aurora Public School.

Mike Patrick, the couple's third child, was born in Aurora in 1966. While living and teaching in Aurora, Ron served on the Aurora City Council.

In 1971, Ron received his Masters Degree in Math Education from the University of South Dakota. Soon after, the family moved to the family farm, Ron juggling the double careers of teaching and farming. However, Ron always found time for family fun. Horseback riding, fishing, water sports and Colorado vacations were some of their favorites. Ron and Les also loved their bridge clubs and were blessed with many close friends.

After retiring from teaching in 1993, Ron and Les enjoyed traveling, especially to tropical islands. He also worked many hours on the Hamilton Community Foundation Board, serving in many capacities.

Ron and Leslie moved to Ord in 2001 where they spent many hours on the Calamus fishing and taking their childrens' families boating and tubing. Ron was especially fond of his horse, Winston, and the two embarked on numerous trail rides.

In 2005 the couple moved to Stromsburg, living there until their move to York in 2015. While in Stromsburg, Ron was very involved civically and in 2013 was crowned Midsommer Swedish Festival King.

God and church were extremely important in Ron's life and he served in various capacities on church boards and committees over the years.

The American Legion, VFW and his time spent in the army were also important aspects of Ron's life. The countless hours he volunteered to these organizations were acts of love given for those who have served.

Ron will always be loved and missed by his daughter and son-in-law, Lee Ann and Galen Maresh of York, son and daughter-in-law, John and Valerie Florea of Lenexa, Kan. and son Mike Florea of York. Grandchildren left to cherish his memory are Justin Maresh and fiancee Nikki Thomas of Crested Butte, Colo., Allison Maresh and spouse Kelly Malone of Santa Fe, N.M., Alex Maresh of Santa Fe, N.M., Lauren Florea and fiance Kal Safy of Manchester, England and Casey Florea of Lenexa, Kan. Brother-in-law, Gary Wintermute and wife Joan of Hastings; sister-in-law, Dianne Wintermute of Holdrege and numerous nieces, nephews, cousins. He was preceded in death by his wife, Leslie; parents, John and Imogene Florea and sister Dorothy Bish.
To plant trees in memory, please visit our Sympathy Store.
Published by York News-Times on Nov. 9, 2020.
MEMORIAL EVENTS
No memorial events are currently scheduled.
To offer your sympathy during this difficult time, you can now have memorial trees planted in a National Forest in memory of your loved one.
Funeral services provided by:
Higby-McQuiston Mortuary
GUEST BOOK
0 Entries
Be the first to post a memory or condolences.