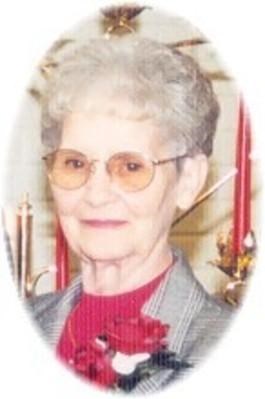 CROOKSVILLE: Ruth A. Caldwell, 81, of Crooksville, Ohio passed away at 4:55 AM, Wednesday, November 13, 2013 at Fairfield Medical Center in Lancaster following a sudden illness.

She was born April 25, 1932 in Redfield, Ohio the daughter of the late Ralph D. and Vinnie Curran Jones.

Ruth was employed as a waitress at the Maysville Bowling Alley when she was younger and was also employed by Glasfloss in Crooksville. However, most of her life was given to being a wife, mother, grandmother and housewife. She was currently living at the Senior Apartments at Brown Circle Drive where she enjoyed the Wednesday Church Services and lunches, Wednesday Bible Studies, bingo on Fridays and all the friends that she had made there.

In addition to her parents, Ruth was preceded in death by her husband, Albert Caldwell who passed away March 14, 1999; the fahter of her children, Carroll Robinson who passed away in 2012; her sons, David, Gary, and infant son, Stephen Robinson; her step-son, Mike Caldwell; her sister, Fern Barton and her brothers, Ed Barton, T.H. Barton, Johnny Jones and Robert 'Pete' Jones.

Family and friends will be received 4:00-8:00 PM, Friday, November 15 at GOEBEL FUNERAL HOME, 36 N. BUCKEYE ST., CROOKSVILLE where VFW 9090 Auxiliary will hold services at 8:00 PM. Funeral services and a celebration of Ruth's life will be held at 11:00 AM, Saturday, November 16 at the funeral home with Pastor Gay E. Blau officiating. Burial will follow next to her sons in Iliff Cemetery at McLuney.

Contributions may be made in Ruth's memory to The LifeWell, 907 W. Main St., Zanesville, OH 43701. Envelopes will be available at the funeral home.

You may read the obituary, sign the Online Register Book (Memory Wall) and share a special memory with the family at www.goebelfuneralhome.com

Published by Times Recorder on Nov. 14, 2013.
To plant trees in memory, please visit the Sympathy Store.
MEMORIAL EVENTS
To offer your sympathy during this difficult time, you can now have memorial trees planted in a National Forest in memory of your loved one.
Funeral services provided by:
Goebel Funeral Home
MAKE A DONATION
MEMORIES & CONDOLENCES
6 Entries
Connie and family so sorry to hear of your loss I enjoyed talking to your grandma when she was in Corning at the beauty shop,missing so many good people.
November 14, 2013
So sorry to hear of the loss of your mother. You are all in our thoughts and prayers. Sincerely, Larry and Judy Lanning
November 14, 2013
Im so sorry for your loss. Ruth was such a very special lady I loved her very much !! God Bless !
Jodi & Tom Wortman
November 14, 2013
May God bless you and your family in this time of sorrow.
Mark and Jerris Patton
November 14, 2013
Carolyn & Family: I am so sorry for your loss! Your Mother was a dear sweet soul. I saw her at the senior center a couple months ago and she recognized me and called me by name. It had been years and I was delighted to see her. I miss the days growing up with your family!
Sharon Yost
November 14, 2013
My thoughts an prayers are with the family, she was a great woman and will be missed by many, I not only loss a good mother -in-law,I loss a great friend RIP
gaye Roberts
November 14, 2013
Showing 1 - 6 of 6 results