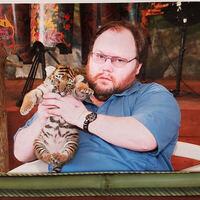 Andrew F. Garland was born in Talara, Peru, of American parents living abroad, Apr 21, 1959. He travelled extensively, due to his father's work, including , Lima , Peru, 4 years in Sumatra, Indonesia, 2 years in Sydney, Australia, then in the US. Summit, NJ, Timonium, Md, Yorba Linda, CA, Anchorage, AK, where he graduated from high school.
His college was spent between, University of Texas, and Illinois, where he graduated with an Accounting degree.
He worked diligently for years with his older brother, Tom, a cardiologist, working as a lab director, in tom's research facility. When his father died, he moved to Naples, to take care of his elderly mother, and moved, with her, to Panama City, in 2015. He had a love of animals, and music. And donated generously to charitable causes.
He is survived by both brothers, Paul and Tom Garland.