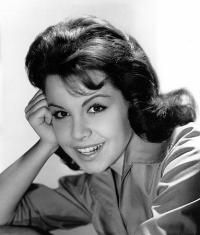 I know, you are in heaven, you had faith in Jesus Christ, Your family loved you so dearly, and your husband who took such good care loved you so very much, God Bless you, Good and Sweet Annette! Love Vince and Mary Lembi.( P.S. My husband is Italian too!)

I truly consider myself one of her #1 fans. As far as I can remember I adored her. I used to clip her pictures from the magazines and I'd rush to buy her latest recordings. Whenever I had a bad day at school, I would get home and put her records on the turntable. Somehow her voice assured me that all would work out fin and it did. I really feel that she helped me, in my growing years, to become a much better person. She had a certain magic. God bless her soul. _ Ernie R. Garcia

Thank you for making anything seem possible if you have the courage to persist. K.H, Age 12

Good Night Annette in that beach party in the sky.

Miss you Annette, you were my dearest friend. As the song goes that I sang for you, You'll always Be My Annette. Vince Smith

I loved your movies and your smile, your are the greatest Annette we miss you. God Bless your family and give them peace.

You were a special part of my childhood. May God hold you safely in His arms in health and rest.

Annette a beautiful lady has joined the Angels in heaven. You are so loved and admired for your wholesome life I know the Lord is so happy to have you with him now.

Never miss an update about Annette. Sign up today.